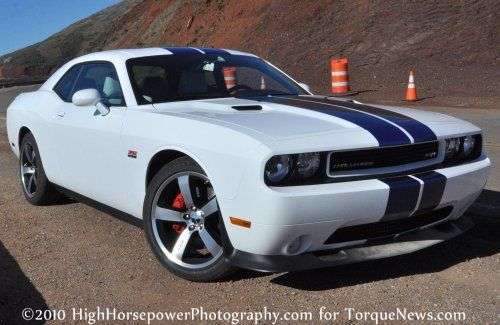 Edmund’s Inside Line got ahold of the 2011 Dodge Challenger SRT8 392 for a test session and while they had it, they strapped the new muscle car to the dyno – making an amazing 452 rear wheel horsepower.
Advertisement

The 2011 Challenger SRT8 392 is rated at 470 horsepower and 470lb-ft of torque but Dodge has had a way of underrating their Hemi since, oh, the mid 1960s. When the original Challenger SRT8 was released with the 6.1L Hemi said to make 425hp multiple sources tested the engine, proving that it made closer to the 450-460hp range.

When the 6.4L Hemi was still a crate engine, when it was offered in fuel injected form it made a Mopar-catalog-advertised 525hp but when it hit the production lineup, it was rated at just 470hp. This loss of 55 horsepower was presumed to be due to the fact that the 2011 Challenger SRT8 392 was 50-state legal, which would require a handful of power-draining additions. However, the results of Inside Line’s dyno test of the 2011 Challenger SRT8 392 shows that the new 6.4L production Hemi makes more than the advertised horsepower.

Click here for a look at all of the new 2011 Dodge models from the LA Auto Show.

For those unsure, a rear wheel drive car usually loses 15% (or so) between the crankshaft and the wheels and a fine example of this was Inside Line’s 2010 Chevrolet Camaro. On the same DynoJet brand dyno that was used for the 2011 Challenger, that 2010 Camaro made 370 rear wheel horsepower with a rating of 426hp. That gives you a drivetrain loss of about 13%...a reasonable number for a rear wheel drive performance car with a modern manual transmission. The 2011 Challenger that Inside Line tested was an automatic which generally has greater drivetrain loss but a 470hp engine making 452 rear wheel horsepower would equal just a 4% drivetrain loss. That means that either Chrysler has designed one of history’s most efficient RWD drivetrains or the 6.4L Hemi is underrated – a lot.

If we use the same 13% drivetrain loss from the Camaro (just as an example), 452rwhp would equate to 519 horsepower at the crankshaft. If we use an 18% drivetrain loss ratio, that same 452 wheel horsepower would take over 550 horsepower at the engine. I should point out that the new 5.0L Mustang GT was also found to be underrated when the initial test models reached the hands of test drivers but that was not the case when the 2010 Chevrolet Camaro SS was tested.

In the battle of the modern muscle cars with the main event offering the 2011 Chevrolet Camaro SS (400hp with an auto, 426hp with a manual) the 2011 Ford Mustang GT (412hp – manual and auto) and the 2011 Challenger SRT8 392 (listed at 470hp with both transmission options) the Challenger is currently the big dog on paper and with stock quarter mile times of the automatic SRT8 392 dipping into the 12.40 range, it is also the fastest in the real world.

Inside Line points out that there is a supercharged Chevrolet Camaro (expected to wear the Z/28 moniker) on the horizon but if that car packs the same supercharged LSA from the Cadillac V-Series, where will the Camaro Z/28 be priced? Getting into an LSA-powered Caddy will set you back no less than $63,000 and while we can expect the Camaro Z/28 to cost a little less than the luxury models with the same engine, how much less is Chevy going to undercut the high performance Cadillacs?

The 2011 Challenger SRT8 392 costs quite a bit more than a stripped down Camaro SS or Mustang GT but when you consider the fact that the SRT trimline of the Challenger only comes with all of the interior gadgets and you factor those items into the cost of the Chevy and Ford muscle cars – the Challenger is only slightly more expensive than the other two. The Challenger also offers a legitimate rear seat with rooms for adults to sit comfortably and the SRT8 offers the most important thing in the modern horsepower war - a whole lot more power.

Click here to check out the full dyno test article from the folks at Inside Line!