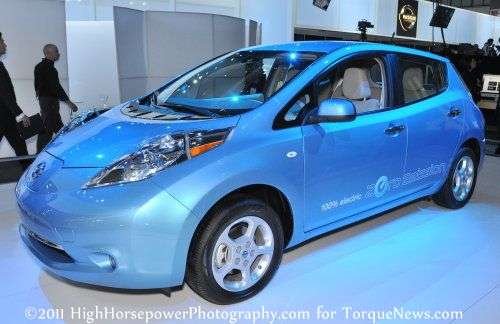 The Nissan Leaf beats the Chevy Volt in April sales

The 2011 Chevrolet Volt comfortably outsold the 2011 Nissan Leaf in the US through the first three months of the 2011 calendar year but even with April bringing about all sorts of production stoppages for Nissan, the all-electric Leaf beat out the extended range Volt sedan in April 2011 sales.
Advertisement

Prior to April, Nissan had delivered just 471 of the 20,000 2011 Leaf electric vehicles the company expects to deliver this year but with 573 units delivered last month, the Nissan Leaf beats the Volt with its best month since being introduced last December. For comparison, the 2011 Chevy Volt saw 493 sedans reach consumers - a slip from the 608 cars delivered in March 2011 – as the Volt trailed the Leaf in monthly sales for the first time this year.

The 2011 Chevrolet Volt still has the overall lead in sales over the 2011 Nissan Leaf by a “score” of 2,029 to 1,044 but if this past month is any indication of Nissan’s plans to deliver the Leaf, the Japanese automaker could close that gap over the next few months. Nissan originally claimed that the only thing slowing down their delivery process of their electric Leaf was their desire to make sure that the entire process went very smoothly and because of this process, we wouldn’t be seeing big delivery numbers until at least April. Many expected that the earthquake and tsunami that rocked Japan and crushed the nation’s auto industry would also hit the Leaf but with its best month yet, perhaps we are seeing the ramp-up of deliveries to US customers?

The challenge for Nissan will be to overcome whatever problems were caused by the earthquake, tsunami and nuclear disaster and continue to fulfill the 20,000 pre-orders taken last year. To this point, someone who wants a new Nissan Leaf cannot walk into a dealership and buy one because Nissan has closed the ordering process until they work through the pre-orders. On the other hand, someone who wants a electric vehicle with a range extended gas engine can walk into a Chevrolet dealership and place their order for a 2011 Chevy Volt.

The question is this…how long will consumers who want a Nissan Leaf be willing to wait to place their order when the Chevy Volt offers similar electric driving without the limits of a pure electric vehicle – complicated by the fact that the Leaf is currently unavailable to anyone who hasn’t already ordered one. Nissan has promised to deliver 20,000 Leafs (or Leaves) this year but with just 1,044 sent to consumers so far, the company is falling more and more behind that original number. At this rate, they have just 8 months to get out almost 19,000 vehicles which, if reached, would mean that the company averages roughly 2,369 Leaf deliveries every month for the rest of this year.

cracovian wrote on May 3, 2011 - 4:50pm Permalink
You have outdated info, Patrick... Only 4 out of 10 preorders result in actual LEAF sales and Nissan promised a few months ago to only bring eight thousand units by the end of September 2011 effectively satisfying everyone on the list. Those ~600 April LEAFs left Oppama one day before the earthquake in March, so they really got lucky. May numbers may match April but it will be a challenge for Nissan since the factory was offline for over two weeks. June and beyond is when it will really start picking up and I'm hoping for mine in August/September...
Anonymous wrote on May 3, 2011 - 5:24pm Permalink
I believe the impact of the Japanese quake has yet to appear in the monthly Leaf sales figures. My leaf was delivered on April 21st and was among those that left on a large ship a day or two before the earthquake in Japan (according to Nissan's email). Stay tuned.
Anonymous Me wrote on May 3, 2011 - 7:11pm Permalink
Chevy is selling all the Volts they can make, Patrick. The reason for the decline is they purposefully diverted 300 Volts to ship to dealers as demo models instead of selling them to eager buyers. They could have easily sold all 300 as the demand is about 10 buyers for every Volt available.
Anonymous wrote on December 25, 2011 - 10:34pm Permalink
Actually LEAF sales are well over 6000 so far. All this production was originally planned for U.S. delivery but then switched to Japan's domestic market when their government did not renew tax incentives for 2011. They have pretty much finished those domestic deliveries and can now focus on U.S. deliveries. So really, Nissan is almost a third of the way through the first 20,000 delivered LEAFs. BTW- May LEAF deliveries could be a real bombshell. There are over 1000 LEAFs in the port of Long Beach and thousands more coming. GM will be ending Volt/LEAF comparisons by mid-summer. Trust me.

Tesla Giga Berlin's New Hurdle: It's Not Only the Gov't, but Now Tesla Itself
Teslas Are Sold Out Until 2023, But The Timing May Reverse
END_OF_DOCUMENT_TOKEN_TO_BE_REPLACED