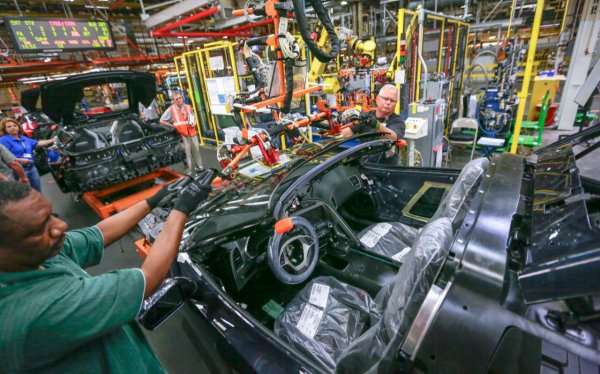 The Union Auto Workers at General Motors’ Bowling Green Kentucky facility where the Chevrolet Corvette Stingray held a vote last night whether or not they should strike – with a whopping 93% voting in favor of refusing to work until their demands are met.
Advertisement

Rumors of a possible strike surfaced late last week and yesterday morning, it was announced that the UAW Local 2164 workers who are responsible for building all new Chevrolet Corvette coupes and convertible on Tuesday evening. That vote was conducted last night and with 93% of the 800 UAW workers at the Bowling Green facility voting in favor of the strike – the process moves onto the next level. Now that the local workers have voted in favor of a labor stoppage at the Corvette plant, the regional branch of the UAW will have to authorize the strike and once the regional shot-callers give the OK to strike – it will be left up to the UAW leaders at the national level. Should all of the involved UAW groups approve the strike, there could be a work stoppage at the Corvette facility and that would be a major hit for General Motors.

The 2014 Chevrolet Corvette Stingray has been a massive success since going on sale and that has led to backups in production. The combination of dealership orders for cars that are going to serve as little more than eye candy with actual customer orders have backed up production with some buyers – such as those who ordered loaded Stingray coupes with the Z51 package – have faced wait times of nearly a year. Of course, should the Corvette plant workers go on strike, it will cause a massive log jam in the supply chain of the new C7 Corvette.

It should be noted that, unlike some strikes over contract disputes, the strike at the Bowling Green Corvette plant only involves the Local 2164 workers and not other facilities. The problem is not between the UAW and General Motors, but rather the issue is between the 800 workers in the Corvette plant and the local management…although some of the issues at hand do come from the automaker at a much higher managerial level.

The exact details are limited thus far, but comments from UAW Local 2164 leaders state concerns of quality control and plant safety. Eldon Renaud, the president of Local 2164, told the Associated Press that there have been “near misses” where workers in the plant could have been severely injured and that creates an obvious concern. Also, there is a plan to eliminate some of the quality control processes in the Corvette facility and the workers aren’t too happy about not having someone checking over their work in order to save a few bucks on a car that costs no less than $50,000.

Eldon Renaud also stated that voting to authorize a strike is about getting the attention of the local and corporate management, not necessarily stopping work at the Corvette Stingray plant. The union workers don’t feel that their concerns are being addressed and with both safety and quality control in question – the workers aren’t sitting back and being ignored by the company. Considering that the workers aren’t asking for money while instead demanding a safer working environment with improved quality control procedures, this most certainly seems like a problem that the automaker will be happy to address in order to prevent the Corvette production line from grinding to a halt.

We will continue covering the simmer pot in Bowling Green, bringing you any news as it becomes available.

John Goreham wrote on April 9, 2014 - 3:42pm Permalink
Strikes are never good, but this month Chevy looked for ways to ease Corvette demand. Now it has a way.
Dan Skopp wrote on April 11, 2014 - 8:17pm Permalink
A good day's pay for a good day's work!! Everybody is deserving of that!! And Good working condition's go right along with that statement!!!