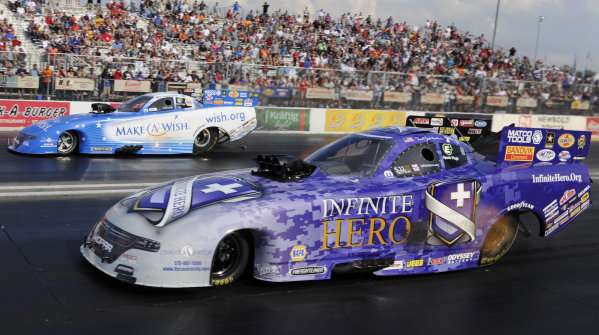 The teams of the NHRA Funny Car class headed to Gateway Motorsports Park in St Louis, Missouri this past weekend for the 2nd event in the 6-race Countdown to the Championship and Jack Beckman drove his Don Schumacher Racing Dodge Charger to the top of the bracket – beating teammate Tommy Johnson Jr for the big win.
Advertisement

The 2016 Mello Yello NHRA Drag Racing season is 2 races into the 6 race Countdown to the Championship and after the Don Schumacher Dodge Charger race cars dominated the first 18 races of the season, Tommy Johnson Jr lost to John Force in the first race of the 10-driverr championship battle in Charlotte, North Carolina. Force took the win in Charlotte, but the Mopar teams held onto their lead in the championship run and headed into St Louis with the hopes of avenging that loss at ZMax Speedway.

NHRA Carolina Nationals
The Don Schumacher Dodge Charger R/T funny car teams came into the NHRA Carolina Nationals knowing very well how important it was to turn in a strong performance, with just 5 races left in the season. The Mopar teams did not get the smokin’ start that they had at past events, with the Camaro of Robert Hight and the Toyota of Del Worsham taking the top 2 spots, while Matt Hagan was the strongest DSR Charger in the 1st round. Ron Capps was 8th, Tommy Johnson Jr was 11th and Jack Beckman was 12th after their early run, but those numbers would increase in the next round.

In round two, Robert Hight and his Chevrolet Camaro turned in a new top time, but Jack Beckman jumped up into the 2nd spot and Capps moved to the 7th spot. Hagan turned a quicker time in round 2, but still dropped to 4th and Tommy Johnson Jr dropped to 16th after 2.

In round 3, Beckman, Hagan and Capps all retained their same positions with Hight out front, but Johnson was able to move up into the 11th spot and in the final round of qualifying, Johnson managed to get up to 8th while Ron Capps jumped into the 3rd spot behind Hight and Beckman. With Capps moving up, Hagan dropped to 5th, but all four of the Don Schumacher Dodge Charger funny cars were in the top half of the field.

In round 2, Tommy Johnson Jr beat Robert Hight, Jack Beckman beat John Force and Ron Capps beat Courtney Force, leaving Tim Wilkerson to be the only non-Charger to advance to the final four when he beat Matt Hagan.

In the final four, Johnson took a starting line advantage and turned it into a strong win over Wilkerson and while Ron Capps beat Jack Beckman off of the line – Fast Jack drove around his teammate on the top end for the win.

The Finals
In the final round, Jack Beckman went head to head with Tommy Johnson Jr in Johnson’s second-straight final round. Unfortunately for him, it followed a similar path to his previous final round – with him settling for runner-up. In this case, Beckman had a starting line advantage and got there quicker, beating Johnson soundly.

The Championship Race
With his second-straight final round loss, Tommy Johnson Jr moved up into the 2nd place position in the standings, with Beckman moving into the 3rd position – and both of them are chasing Ron Capps. Matt Hagan is the only DSR Charger driver not in the top spots, and he sits 6th right now.

The complete standings following the Carolina Nationals are listed below with the driver’s name, what they drive, number of wins on the season and total points.