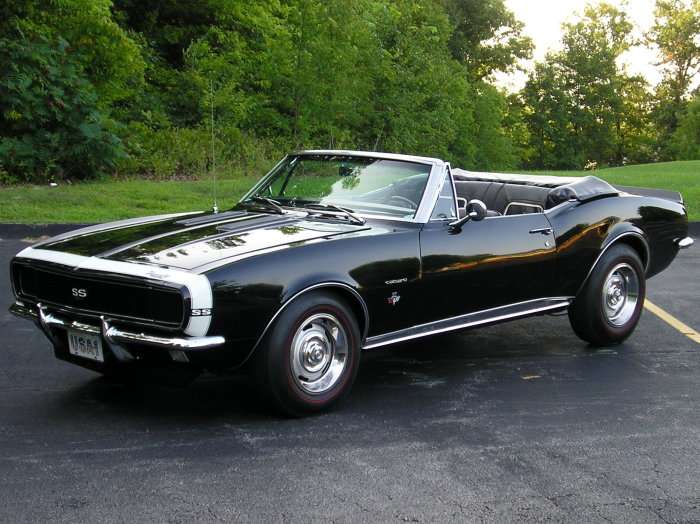 The TorqueNews/Camaros Unlimited Camaro of the Month for April 2018 is the 1967 Chevrolet Camaro SS/RS Convertible shown here, owned by Sean Mundy.
Advertisement

Each month, TorqueNews works with the members from the Camaros Unlimited Facebook group to select our Camaro of the Month. The process begins with the members of the Camaros Unlimited Facebook page – nearly 42,000 of them – nominating their favorite Chevrolet Camaro owned by a fellow member of the page. Once five owners have been nominated, the voting begins and when the balloting closes – we have our Camaro of the Month.

For April 2018, our Camaro of the Month is the gorgeous 1st generation Chevy Convertible shown here, owned by Sean Mundy. We reached out to Sean for more information on his car and below, you will find all of the details on this pristine 1967 SS/RS.

Sean Mundy’s Camaro
I purchased my Camaro SS/RS 350 4-speed convertible in 2001 from a local St Louis county, Missouri gentleman who had done a quick restoration on the car. It was what I would classify as a very nice driver car, and that's what I had originally intended to do with the car. My previous car was a '67 Camaro SS/RS coupe that had slowly transformed into a street/strip car over the years, and was really no longer streetable, so I was looking for a car that I could enjoy more.

I drove the car for a few years before starting to go through it, correcting those things that were not factory correct, and by 2004 had entered my 1st local car show, and placed 1st in my class. Needless to say I was hooked.

Every winter I would take on a project with the car in an attempt to make it as correct appearing as I could, and by 2008 the car was basically re-restored from a "B-" level to an "A" level car. The car is as clean underneath as it is up top.

In 2011 the engine finally expired, and being that the car is not #'s matching, I decided to have my previous engine builder, AMT Racing Engines, do a mild race motor for the car. Something that could be driven daily, but had more get up and go that the stock motor did. The car is a blast to drive and sees many different types of events. From local cruise-ins at Sonic, to 200 mile driving cruises, to parades, to locals car shows, to an occasional trip down the drag strip.

This Camaro SS/RS currently has a 350 engine, Muncie M-22 4-speed transmission, and 12 bolt rear end with a 3.55:1 rear gear. The car show scene is fun, but I have been getting drawn back into the racing scene recently, and my future plans for the car may see a few bolt on performance parts to see what it is actually capable of. Not to worry the purists though, as I did say bolt on, and I would never cut on or weld on this car like what happened to my previous Camaro. This one is a keeper. Special thanks to Mark Murphy for the body and paint work, Doug Albeitz at AMT Racing Engines, and John Reese at Express Upholstery Service for all their help along the way.