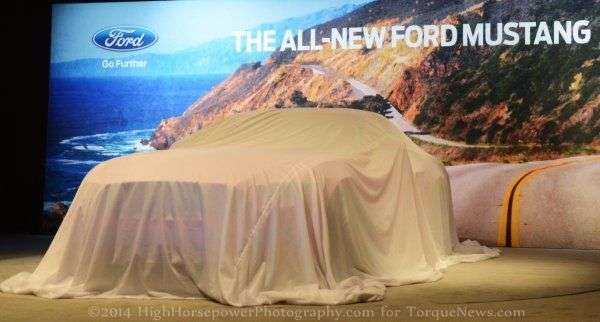 Anticipation and Speculation on the 2016 Ford Shelby GT350 Mustang Grows

While Ford is preparing to celebrate the 50th anniversary of their fabled pony car with the 2015 Mustang on display at the 2014 New York International Auto Show and a variety of enthusiast events around the country, the attention of the internet chatter has turned to the 2016 Shelby GT350 Mustang – the car slated to be the top of the line performance model for the new S550.
Advertisement

Ford Motor Company hasn’t offered any official information on the 2016 Shelby GT350 Mustang, but the many rumors floating around the internet have been supported by a plethora of spy shots and videos showing what we believe to be the next generation Shelby Mustang in action. As we are slowly running out of topics to discuss on the 2015 Ford Mustang in V6, EcoBoost and GT trim, we turn out attention once again to the future of the premium performance Mustang – which may or may not be called the Shelby GT350.

First off, we don’t even know for sure that the next super-Stang will be called the Shelby GT350 nor do we know that it will arrive as a 2016 model year vehicle. However, rumors, insider information and patent office documents lead us all to believe that Ford will continue to use the Shelby name even though the legendary Carroll Shelby passed away almost two years ago. This new top of the line Mustang could just as easily be called the new Mach 1 or the new SVT Cobra – but word on the street is that it will be the GT350. Frankly, I wouldn’t be surprised for one second if the new high performance Mustang isn’t called the Shelby GT350, but for the sake of discussion Im using that name just like everyone else.

Now, one reason that Ford might be going with the name Shelby GT350 for the top of the line 2016 Mustang is that it will actually be less powerful than the current 2014 Shelby GT500 Mustang. With 662 horsepower from the supercharged 5.8L V8, the current car is going to be hard to beat with an affordable, road legal muscle car so it is widely expected that the S550 high performance Mustang will be a little less powerful than the GT500. With that in mind, GT350 makes a whole lot more sense.

In terms of the drivetrain, the rumors on the 2016 Ford Mustang Shelby GT350 go two different directions. Some sources expect that the new super-Stang will feature a supercharged version of the 5.0L V8 that powers the 2015 Mustang GT while others expect that the motor will be naturally aspirated and slightly larger while still using the same basic architecture as the Mustang GT’s V8. Regardless of how it gets there, I would expect that the 2016 Shelby Mustang will offer somewhere in the area of 550-600 horsepower while the lightweight new chassis will afford the less-powered GT350 similar performance capabilities to the current GT500.

Aside from the obviously large engine upgrade, the 2016 Ford Shelby GT350 Mustang will likely benefit from a close ratio 6-speed manual transmission, a race-tuned suspension system (with independent rear suspension, of course) and a high end braking system that will likely feature a performance brand caliper such as Baer or Brembo while a set of super stick summer only performance tires wrapped around lightweight rims will help put the power to the ground.

Finally, while the 2016 Ford Shelby GT350 Mustang will share the basic design language that we know and love from the 2015 Mustang GT, we can expect a hood with some sort of cold air induction opening, a body kit that makes the front and rear end more aggressive, a functional rear spoiler and an overall stance that is much more aggressive than the basic 2015 Mustang.

Hopefully, Ford Motor Company will offer up some idea as to what we can expect from the new high performance Mustang trimline at the 50th anniversary celebration that is centered around the upcoming 2014 New York International Auto Show.