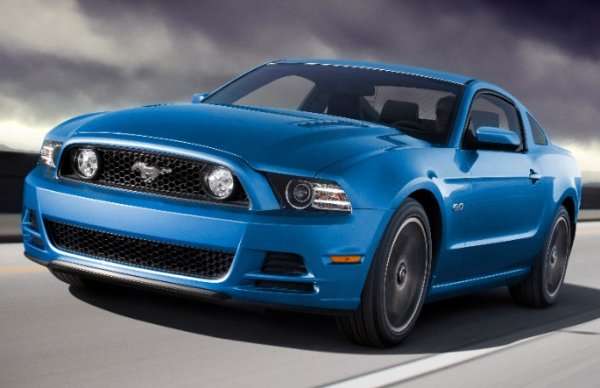 The Ford Mustang was the bestselling sports car in the US for the second straight month in March 2014, beating the Chevrolet Camaro and Dodge Challenger in monthly sales while also taking a lead in the annual muscle car sales race.
Advertisement

There are a great many prospective buyers eagerly holding off on their new sports car purchase until the 2015 Ford Mustang arrives later this year, but that hasn’t slowed sales of the current Mustang at all. In fact, the controversial nose of the S55 Mustang has encouraged some muscle car buyers to run out and buy an S197 Mustang before they are gone – which has in turn helped Ford to sell more Mustangs than GM sold Camaros or Chrysler sold Challengers for the second straight month.

Ford Motor Company sold 9,305 examples of the mighty Mustang in March 2014, up 21% from the same month last year. This is especially impressive considering the incredibly unpleasant winter that has rocked pretty much the entire US in the first three months of 2014, but with many areas seeing warmer weather in the past few weeks, muscle car sales quickly climbed with roughly 30% more Mustangs sold in March than just one month earlier.

General Motors also saw an increase in sales from March 2013 to March 2014 with 8,624 Chevrolet Camaros sold accounting for a 6.4% improvement. Like the Mustang, the Camaro posted unimpressive sales during the first two bitter cold months of 2014, but things improved significantly in March. Unfortunately for GM, this growth wasn’t enough to allow the Camaro to beat the Mustang in March 2014 sales. With a margin of 681 units, the Camaro trailed the Mustang for the second straight month.

The Dodge Challenger was – as it always is – the third bestselling muscle car in America in March 2014. Chrysler sold 4,882 copies of the Challenger last month which represents a massive drop of 20% compared to the same month last year. That looks bad on paper, but it should be noted that March 2013 was the best month for the Challenger ever. Dodge sold only 3,694 Challengers in February 2014 so the 4,882 units sold last month mark a solid increase as we climb out of the grasp of Old Man Winter.

The bigger news is that the Ford Mustang has now pulled into the top spot for American sports car sales, leading the Chevrolet Camaro by just 28 units. Ford has sold 19,596 copies of the Mustang in 2014 – up 13% from the same period last year. The Camaro is also up for 2014, but the 1.9% increase isnt enough to allow the Chevy muscle car to hold onto the top spot in the annual sales race. General Motors has led the sports car sales segment with the Camaro for each of the past 4 years, but with Ford looking at a huge spike in sales when the next generation Mustang arrives later this year – GM could have a hard time coming from behind in the second half of 2014. Of course, it should be pointed out that the Mustang has held small leads in each of the past two years only to have the Camaro catch up and pass late in the year. With the 2015 Mustang expected to drop later this year, that late-year charge by the Camaro will need to be epic to best the Mustang once the 2015 models arrive.