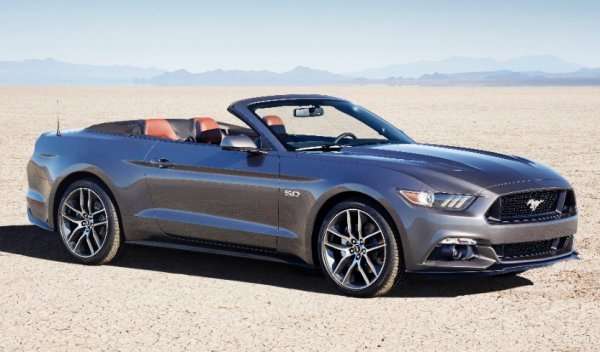 Ford Motor Company designed the 2015 Ford Mustang Convertible canvas top assembly to answer every consumer concern about the current drop top Mustang – with the most significant change being the top-down time being 50% faster than the current models.
Advertisement

I got a chance yesterday to spend a few hours in the presence of the 2015 Ford Mustang Convertible with a few members of the engineering team responsible for the new drop top pony car. They walked me through the highlights of the new Mustang’s convertible top design including things like more effective drainage channels that prevent rain water from running into the side windows, a cleaner new top latch receiver system that is now integrated into the windshield trim and the triple layer cloth design that should keep the 2015 Mustang better insulated and quieter while also giving the new Convertible a smoother look when the top is up.

The most significant feature of the 2015 Ford Mustang Convertible is the new single latch system that allows the driver much easier – and much quicker access to put the top down when in a hurry. The current (2014) Mustang Convertible has a two latch system with one located behind each of the sun visors. This means that a driver sitting in the driver’s seat has to reach across to the far corner of the windshield on the passenger’s side to put the top down. The new system (shown in the image below) has a single latch that you swing down and twist to release the roof from the receivers. From there, a button located just in front of the large latch puts the top down in about 7 seconds and the new top design provides a much cleaner, lower profile look when stowed. For comparison, the 2014 Mustang Convertible top takes about 15 seconds to go from fully up to fully stowed to the next generation Mustang Convertible will drop the top in roughly half the time. It should be noted that the top may take up to 10 seconds to fully retract when the engine isnt running but the performance of the 2014 models is also greatly reduced when the top is working strictly on battery power...making it quicker than any Mustang Convertible ever. Why does this all matter? Anyone who has owned or driven a convertible for any length of time quickly learns that you don’t sit at stoplights for as long as you think. With the 2014 Mustang Convertible, when you come to a stop at a light in traffic, you have to flip down both sun visors, unhook both latches and then spend 15 seconds waiting for the top to retract. If you are shorter person, you may have to also add in time to unbuckle yourself and then buckle yourself back up. In many cases, you don’t spend enough time during the average stop light pause and you then become “that person” who is holding up traffic while playing with your convertible top. On the other hand, with the 2015 Mustang Convertible you won’t need to climb around the interior and with only one latch, the time spent preparing the top to drop is significantly reduced. Also, the top only takes 7 seconds to retract so the entire action of putting the top down on the 2015 Mustang will likely take you less time than you spend waiting for the top on the current Mustang Convertible to retract.

Finally, another interesting innovation of the 2015 Ford Mustang Convertible is the new two piece tonneau system. The 2014 Ford Mustang Convertible came with a large cover which snaps down around the hole into which the retractable roof stows itself. This tonneau gives the Mustang Convertible a much cleaner look but when the top is up, the tonneau can be a cumbersome piece to keep in the vehicle – and putting it on is time consuming enough that many people don’t bother. To solve the storage and installing concerns, Ford has designed a new two piece tonneau (shown below) that leaves much of the actual convertible top exposed while covering the small openings through which the metal frame of the top moves. These pieces take up very little space when not in use so storage isnt an issue and they simply tucked down and snap into each of the holes, so they are far less time consuming to set up. The images below show the Mustang without and then with the inserts. Having owned a convertible in college and remembering what a pain in the arse it was to deal with the tonneau – I love this new feature. The video below shows a 2015 Ford Mustang Convertible (with the EcoBoost engine, by the way) with the top up and latched. The gentleman inside unlatches the roof, puts the top down, pauses, puts the top back up and latches it – all of which takes less than 20 seconds with the engine not running.

Tony wrote on April 15, 2015 - 8:21pm Permalink
Ford has not shipped any of these covers and is unable to tell us when they will be shipped. Many of us have a convertible that can't be used & no information from Ford - complete and total radio silence. Help!