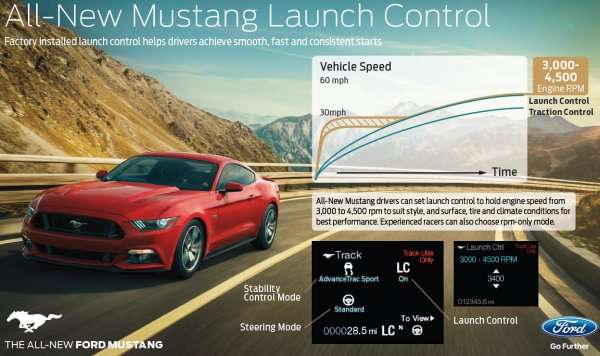 The 2015 Ford Mustang will be the most technologically advanced version of the fabled pony car in its 50 year existence and the S550 Mustang GT will be the first to feature both Track Apps and Launch Control as standard equipment – with the slightly less powerful EcoBoost Mustang also coming with Track Apps.
Advertisement

For those who are not familiar with the Track Apps, this handy program works with the driver information display in the middle of the gauge cluster of the 2015 Ford Mustang GT and EcoBoost. Ford hasn’t said exactly what will be included with the 2015 Track Apps program, but based on what was available in the Boss 302, we have a good idea of what to expect. First off, the Track Apps system will feature a small drag strip “Christmas tree” graphic that will count down the driver to help measure eighth mile time and quarter mile time, as well as the trap speeds of both virtual track lengths. As part of this timing system, the Track Apps will also measure 0-60 and possibly 0-100 times as well as measured braking distances. Finally, I would expect that there will be a G meter that will show the forced created during hard acceleration, hard braking and hard cornering – presumably with one screen that shows the current G forces and another which shows the peak force reached. I would hope that Ford also includes some sort of summary screen that shows the best historical eighth mile time and speed, quarter mile time and speed, braking distances and perhaps even the recorded top speed.

Again, Track Apps will be standard on the 2015 Ford Mustang GT and EcoBoost models so only V6 owners won’t get this awesome little performance gadget – at least not in stock form. I wouldn’t be surprised to see something like a V6 Performance Package down the road that will allow those folks with the 3.7L V6 to enjoy the Track Apps as well. I loved the Track Apps in the previous Mustangs I’ve driven and I suspect that new 2015 Mustang buyers will love them as well.

In addition to the Track Apps, the 2015 Ford Mustang GT will also come with standard Launch Control. This system allows the driver to pick a preprogrammed launch RPM. When Launch Control is activated, the driver engages the clutch and holds the throttle wide open, but the system holds the engine RPMs at the chosen figure between 3,000 and 4,500rpm. When the driver lets the clutch out, the Launch Control system works to get the 2015 Mustang GT away from the line as quickly and efficiently as possible. When you launch, the system detects wheel spin and other various parameters to help get the Mustang moving as quickly as possible and with as little wheel spin as possible. The system can also be adjusted to only hold the RPM for those who want to have less electronic input on a hard launch. This system will help novice drivers to produce better hard launches, but similar systems at work in other vehicles have shown to be a touch slower than a very experienced driver so those who are more comfortable doing the work themselves on a hard launch can chose to make use of the RPM limiter only.

This is only standard on the 2015 Ford Mustang GT, but I would expect that any performance package for the EcoBoost and maybe even the base V6 Mustangs. This may have an especially strong impact on the EcoBoost Mustangs, as the launch control system could allow the driver an easier time of spooling up the turbo prior to launching. Then again, with the EcoBoost Mustang being billed as an economy package, Ford may opt to keep the Launch Control system unique to the Mustang GT…and the future higher end Mustangs.

Along with many of the other high tech features of the 2015 Ford Mustang, both Launch Control and Track Apps are adjusted and controlled by use of the buttons on the steering wheel. These features will undoubtedly bring more driving fun to the S550 Mustang while also allowing Mustang GT drivers to turn out better performances when drag racing.