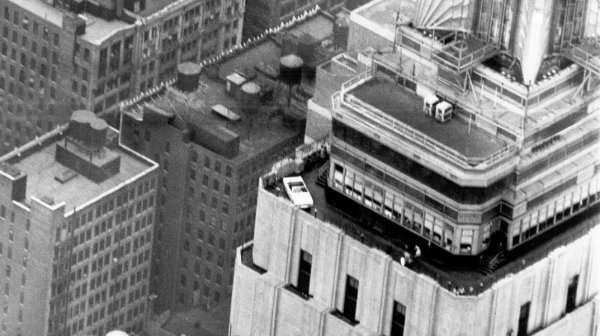 The 2015 Ford Mustang will help the Motor Company celebrate the 50th anniversary of the fabled pony car and to continue the massive media coverage of the next generation Mustang, Ford will park a 2015 Mustang Convertible on the observation deck of the Empire State Building – by cutting it apart and taking it up to the roof in the elevators.
Advertisement

When Ford Motor Company introduced the new Mustang back in 1964, it was a success story like the auto industry had never before seen and to keep that popularity going, the automaker wanted to do something really special to show off the 1966 Mustang in October of 1965. Ford wanted to show off the Mustang in the most remarkable way possible – on top of the world’s tallest building. At that time, the world’s tallest building was the New York Empire State Building standing 1,455 feet tall and while the top of the building isn’t the right shape to hold a car, the 86th floor observation deck seemed like the perfect place to show the world the 1966 Mustang. With the hustle and bustle of the New York City streets below, it was far too dangerous to use a helicopter to try to park the Mustang on the narrow observation deck ledge and using a crane simply wasn’t feasible. That left Ford the only choice of cutting the 1966 Mustang into several sections and taking it up to the 86th floor in the same elevators that you or I would use to check out the amazing view.

The Empire State Building it no longer the tallest building in the world, but it is still one of the world’s most famous buildings so to pay homage to the old school publicity stunt from 1965 – Ford will perform the same task in the same way with the new 2015 Ford Mustang Convertible. Although helicopter and crane technology has increased exponentially since 1965 so there is a chance that Ford could get the 2015 Mustang in some other way than cutting it up and shipping it skyward in the elevator, the Motor Company will cut apart a new S550 Mustang Convertible and sent it to the observation deck in the elevator.

“New York is one of the greatest cities in the world, and it’s the place where the Ford Mustang story began 50 years ago,” said Mark Fields, Ford chief operating officer. “We’re thrilled to be visiting the architectural landmark that has been the heart of the Manhattan skyline for 83 years with the newest generation of the car that is the soul of Ford Motor Company.”

The 1966 Ford Mustang Convertible that sat atop the New York City skyline on the observation deck of the Empire State Building after being cut into four sections which would fit into the elevators – the rear, middle, front and windshield. Also, prior to being shipped up in the elevators the seats, engine and transmission of the 1966 Mustang were removed to make the process a bit easier while also preventing fluids from running out of the drivetrain into the Empire State Building elevator. Ford hasn’t offered exact information as to how the 2015 Mustang will be dissected to fit into the elevators, but considering that the new Mustang is slightly larger than the 1966 models, there is no doubt that this process is even more exacting than it was back in 1965.

“Like all good craftsmen, our team is measuring twice and cutting once to make sure we can get this Mustang up in the elevators,” said Dave Pericak, Mustang chief engineer. “Like the team that did this in 1965, the current crew visited the Empire State Building before starting and took careful measurements of its new elevators and doors before cutting up the car.”

Fortunately, the Ford engineers tasked with taking the 2015 Mustang Convertible to the top of the Empire State Building have computers which can help make the cuts more precise so when the new Mustang is reassembled on the observation deck – it will look every bit as great as it did before being hacked apart.

Ford will execute this publicity stunt on April 16th and 17th, offering visitors to the Empire State Building a chance to check out the 2015 Mustang Convertible on the observation deck during the first days of the 2014 New York International Auto Show – exactly 50 years after the very first Mustang met the world at the New York World’s Fair.