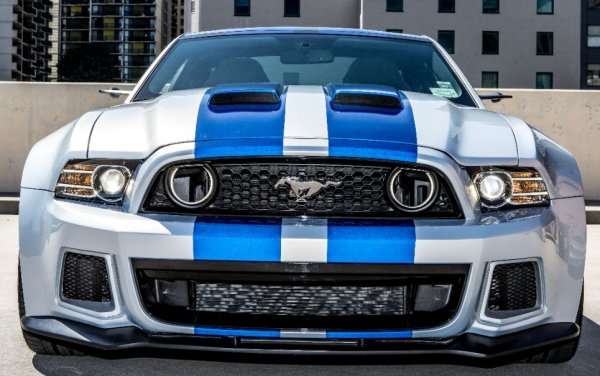 This is the Coolest 2015 Ford Mustang Ad Yet

The 2015 Ford Mustang will make its big screen debut in the upcoming action racing flick Need for Speed so it should come as no surprise that the newest – and most exciting – 2015 Mustang is themed after the fast paced movie starring Breaking Bad’s Aaron Paul.
Advertisement

When Need for Speed opens in theaters around the country on March 14th, it will be the first major motion picture to feature the new 2015 Ford Mustang. Much like the Need for Speed video game series, the Need for Speed movie is all about adrenaline fueled street racing and the mighty Mustang will be well represented by both the new S550 Mustang and the heavily modified 2015 Mustang GT hero car (shown above in silver and blue). Need for Speed will likely be one of the fastest paced movies of the year so it should come as no shock that a Need for Speed-based 2015 Ford Mustang commercial is the most exciting piece of marketing that we have seen for the new muscle car – shy of the multinational debut.

“This is the first time anyone will get to see the new Mustang in a film, and ‘Need for Speed’ embodies the spirit of what Mustang is all about,” says Steve Ling, Ford car marketing manager. “We hope the movie gets the audience really excited about what automobiles are all about, to understand the passion that goes into creating Mustang.”

Need for Speed stars Aaron Paul of Breaking Bad, a renegade racer who has been convicted of a crime and sent to jail but he can regain his freedom through a series of high stake races in million dollar hypercars – and a super modified 2014 Ford Mustang GT. The storyline might not be the most realistic but as car-guy movies go…we can expect Need for Speed to be legendary. Even if the storyline is as farfetched as it gets, Need for Speed should be a remarkable action movie packed full of outrageous automotive stunts that will make the Fast and the Furious crew blush.

With all of that in mind, you can probably imagine that the first 2015 Ford Mustang advertisement that relies on clips from Need for Speed is just as fast paced as the movie itself. Unlike the advertisements for the movie, this 30 second spot doesn’t show a bunch of million dollar hypercars flying and flipping and racing at 200mph through dense traffic, but we do get to see – and hear – the 2015 Ford Mustang GT in all its glory. We do get a little Need for Speed flavor but the new Mustang is clearly the star of this short advertisement. We are reminded that Need for Speed is coming and that the new Mustang will be featured but this 30 second slip is really all about showing off the 2015 Mustang GT.

“The best movie cars combine tons of power, rear-wheel drive, great handling and the ability to be easily flung around corners,” said Need for Speed Director Scott Waugh. “As we’ve seen hundreds of times over the years – from ‘Bullitt’ to ‘Gone in Sixty Seconds’ – Mustang fits the bill perfectly, and it’s really a car that represents American culture at its best, which is why we chose it for Toby’s ride in ‘Need for Speed.’”

This Need for Speed spot gives us all our best chance to hear the 2015 Mustang GT accelerating hard at speed in a variety of moving shots while also giving us an earful of Aaron Paul revving the GT’s engine. I think that this commercial also implies that the 2015 Ford Mustang is so incredible that it can help you get out of some sort of felony conviction – but we will have to wait to make that call until we have driven the next generation Mustang. In the meantime, crank up your speakers and enjoy this new 2015 Ford Mustang commercial featuring the cast of the Need for Speed movie.