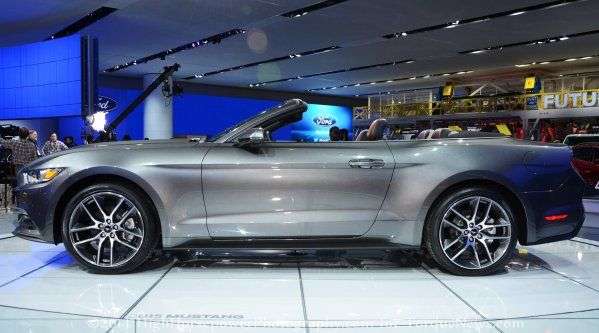 No Fun Package Name for the 2015 Ford Mustang EcoBoost

While the 2015 Ford Mustang will feature a new 2.3L EcoBoost engine that will likely make the next generation pony car the most efficient of all time without hurting performance, this new engine will be introduced as an option for the base Mustang and not a part of a new package such as the modern SVO.
Advertisement

We learned ages ago that the 2015 Ford Mustang would feature a new 4-cylinder EcoBoost engine that will almost surely make the S550 Mustang the most efficient of all time. More importantly, this new EcoBoost technology will allow the 4-cylinder Mustang to offer the kind of performance that you expect from the Ford Mustang. Some people think that it is a travesty that the mighty Mustang will have a lowly 4-cylinder engine under the hood, but everyone should be reminded that Ford Motor Company has offered a 4-cylinder engine in the past with great success.

The original turbocharged Ford Mustang created quite a cult following so when it was announced that the 2015 Ford Mustang would have a turbocharged 4-cylinder EcoBoost, many people hoped that Ford would call this new model the modern SVO Mustang. When the new EcoBoost Mustang was introduced in December devoid of any SVO badges, those hopes seemed to be dashed. So what will Ford call the EcoBoost package for the 2015 Mustang? Turns out…they wont call it anything.

I had a chance to speak with Ford Motor Company Global Communications Manager Alan Hall and I asked him if the 2015 Ford Mustang if the EcoBoost engine would be part of a specially named package such as the 2015 Mustang SVO or the 2015 Mustang EcoBoost. He explained to me that those Mustangs fitted with the powerful EcoBoost engine will not carry any special name or trimline. The EcoBoost will be offered as an option in the 2015 Mustang over the standard V6, but much in the same way that the base model Mustang isn’t called the Mustang V6 – Ford won’t officially call appropriately equipped models the Mustang EcoBoost for marketing or sales purposes. Buyers will most likely refer to their S550 as an EcoBoost Mustang or a Mustang EcoBoost to point out that it has that high tech mill, but there isn’t going to be a special package or trimline that includes the new EcoBoost engine.

This is an interesting choice by Ford Motor Company to introduce the new 2.3L EcoBoost as simply an optional engine for the base model 2015 Mustang. It would seem to me that Ford is missing out on an opportunity to call on a popular old school name for marketing purposes, but I'm no marketing expert. This really won’t have any negative impact on the next generation Mustang, but it will most certainly bum out some SVO fans who were hoping to see a reincarnation of the classic turbo-4 trimline.

Now I should point out that the original 4-cylinder engines in the Ford Mustang didn’t come as a part of a special trimline back in the 70s. The best known turbocharged 4-cylinder Mustangs were the Turbo GT and SVO models from the mid 1980s, but the first turbo 4 was introduced in 1979 when the Fox Body was introduced. Ford offered the 2.3L turbocharged engine in the 1979 and 1980 Mustang with slightly less power than the Mustang GT’s V8 and those engines didn’t come with a special trimline. The engine was re-introduced for 1983 as the Turbo GT. Based on that…maybe there will be a special package for the EcoBoost in the near future, but it won’t be in 2015.

Soakee wrote on February 18, 2014 - 3:57pm Permalink
Apparently unknown to many, the 2.3L turbo four was introduced with the 1979 Mustang. Why does everyone continue to believe that it originated with the 1983 model?
Patrick Rall wrote on February 19, 2014 - 1:19pm Permalink
I referenced the introduction of the turbo 4 in 1979..?
DMcG wrote on February 18, 2014 - 11:05pm Permalink
I think you stretch the point to say that Ford has used four-cylinders in the Mustang "with great success." I don't remember anyone liking the non-turbo 2.3, whether in the Mustang II or in the Fox (where its 21-second 0-60 time made it the all-time dog of dogs). The turbos were better, but were not universally hailed. The 79-81 version was the best Mustang a person could buy, so grousing was more limited. But once the "5.0 HO" came out in 1982, the turbo fell off the charts. The Turbo GT models sold in the hundreds, not the thousands. I have seen one. Ever. Of course, the SVOs are considered special, and they were in their own way with great suspension, brakes and bespoke body work. But their engines, while powerful, were torque-less, loud, rough and prone to cooking turbo bearings. Combined with a price 40% above the V8 GT, all that explained their very limited sales appeal. Given all that, Ford would do well to NOT call back to the past when marketing the EcoBoost. It will hopefully be all things the old turbos were not: smooth, reliable, rev-happy, torquey and affordable. If Ford hits that target, even I will be interested.
Emph66 wrote on February 19, 2014 - 7:13pm Permalink
The SVO Turbo Mustangs (84-86) were much more expensive than the 5.0 LX or GT. Not quite as fast in a straight line stock, but easily out handled the lesser Mustangs. They responded very well to tweaks and could easy make 250-300 HP.