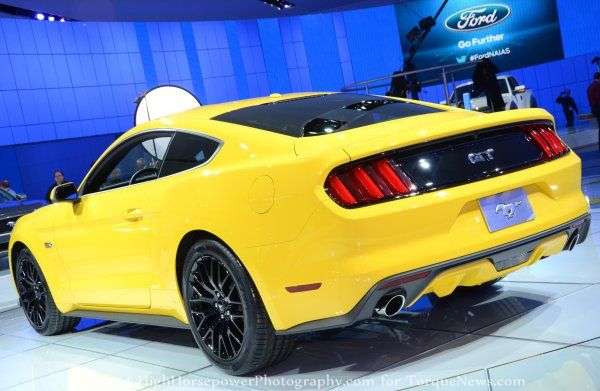 Information on the new 2015 Ford Mustang continues to flow out of the 2014 North American International Auto Show and the newest bit of info on the next generation Mustang pertains to the top speed - with an increase for the base V6 and GT models along with a surprisingly high top speed for the new EcoBoost Mustang.
Advertisement

The 2015 Ford Mustang will have two engines carried over from the 2014 models – the base 3.7L V6 and the 5.0L V8. It is expected that the 2015 base V6 will continue on with the same power outputs as the 2014 Mustang but Ford has increased the top speed of the base model Mustang to 121 miles per hour. That is an increase of 8 miles per hour from the 2014 models so even without any more power, the changes made to the S550 Mustang base model allow Ford to bump up the speed limiter for V6 owners.

Technically, Ford has only stated that the 2015 Mustang GT will offer “at least” 420hp and 390lb-ft of torque so the newest V8 Mustang could have the identical output to the 2014 models but my bet is that there will be at least a little more power for the next generation Mustang GT. The new chassis, new suspension, high tech gadgets and slight revisions made to the 2015 Mustang GT has allowed Ford to increase the limited top speed from 149 to 155 miles per hour.

While it is good news for performance minded consumers that the 2015 Ford Mustang in its base V6 and GT trimlines will offer a higher top speed but the bigger news pertains to the new 4-cylinder EcoBoost-powered S550 Mustang. Ford has promised that this new turbocharged 4 will offer more than 300 horsepower and 300lb-ft of torque so it will serve as an upgrade to the base V6 while offering less power than the Mustang GT. More importantly (to some people, we think) is the fact that the EcoBoost package will likely be the most efficient option in the lineup and maybe one of the most efficient sporty cars sold in the US. Fortunately, the wonders of EcoBoost technology allow Ford to make the 2015 Mustang super efficient without killing the performance of the car.

It should be noted that all of these 2015 Ford Mustang top speeds are electronically limited so once tuning companies like Superchips and Diablosport offer a tuning option for the next generation Mustang, the top speeds will jump across the board but for those who plan to leave their pony stock after buying it, they will be able to reach higher speeds than those folks driving stock 2014 Mustangs.

Jonothan wrote on January 24, 2014 - 9:04am Permalink
I can't wait to see what the tuners will be able to do with the Ecoboost. Less weight with similar power to GT will make it a great for autocrosser and HPDE.
felix wrote on March 24, 2014 - 8:38am Permalink
I cant wait till they come out in dealerships.
Michael Mastro wrote on January 28, 2017 - 11:38am Permalink
"but Ford has increased the top speed of the base model Mustang to 121 miles per hour." Really? Last week I hit 125 and was in 5th.