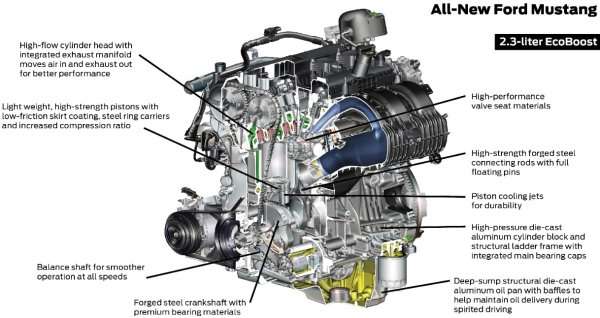 The 2015 Ford Mustang will feature a new 2.3L EcoBoost that will offer more than 300 horsepower and 300lb-ft of torque – levels of power that could more than appropriately power a new high performance Ford Focus RS right here in the US market.
Advertisement

When the 2015 Ford Mustang was introduced with the news that it would feature a new EcoBoost 4-cylinder engine, it seemed like big news for Mustang fans but it could also pay off in a big way for Ford fans who want a high performance sport compact. For around a decade or so, the Ford Focus RS has been the highest performance compact from the Motor Company but while the Focus RS was thrilling European drivers – it was giving American Ford fans a reason to complain. The Focus RS has never been offered here in the US and while the Focus ST brings a heavy dose of performance to American sport compact drivers, the Focus ST still falls short of the modern Focus RS.

There are a variety of reasons that Ford hasn’t offered the RS package here in the US but the biggest roadblock comes in the way of available engines. The turbocharged engines that have powered past Focus RS models in Europe were not motors used here in the US market so for Ford to bring the European Focus RS into American dealerships, the company would have to go through all of the cost and headaches pertaining to EPA fuel economy and emission levels just for a car that is going to be selling in very low volumes. In short, it wasn’t worth Ford’s time to get the Focus RS engines approved for US use just to sell a couple thousand units (in a best case situation).

Fortunately, the 2.3L EcoBoost engine that will power the 2015 Ford Mustang seems almost perfect for the next generation Focus RS and since the company will have gone through all of the development, testing and EPA approval measures to run that engine in the Mustang – it will be ready for use in an American-sold Focus RS. In fact, rumors from European sources indicate that the new Mustang’s EcoBoost will be the powerplant for the European Focus RS with power in the range of 300-350 horsepower.

The current Ford Focus ST relies on a 2.0L EcoBoost to produce 252 horsepower and 270lb-ft of torque. The 2015 Ford Mustang EcoBoost model is promised to deliver at least 300 horsepower and 300lb-ft of torque and if I had to guess (which I am), I expect around 325hp and 330lb-ft of torque. Even if the Focus RS used the engine directly from the Mustang with no further upgrades, it would be significantly more powerful than the American Focus ST and the outgoing European Focus RS (301bhp).

As has been the case with previous Focus RS models and the Focus ST, the next generation Ford Focus RS (whether it is sold in the US or not) will feature a manual transmission and front wheel drive only – so Ford won’t be looking to take on the likes of the Subaru WRX STI or the Mitsubishi Lancer Evolution with their similarly powerful engines mated to a standard all wheel drive system. All wheel drive has become the hot topic in the sport compact world but it is likely that Ford will keep the new Focus RS a front drive model. Even with that in mind, there is no doubt that a 300+ horsepower Focus RS would prove to be very popular with American sport compact fans and with the 2.3L EcoBoost engine all set for American use, it is hard to think of a reason why Ford wouldn’t offer the RS here in the States.

As an interesting note, when the Ford Focus ST was launched in the US, I had a chance to speak off the record with a member of the Ford PR team who explained to me that if the Focus ST went over well in the US, it could very well lead to a higher performance model. At that point, the Ford rep wasn’t sure whether this new model would be called the SVT Focus or a Focus RS but with the popularity of the Focus RS overseas and Ford’s push to offer the same popular models in multiple segments – right now seems like the perfect time to unleash the Focus RS on the American market.