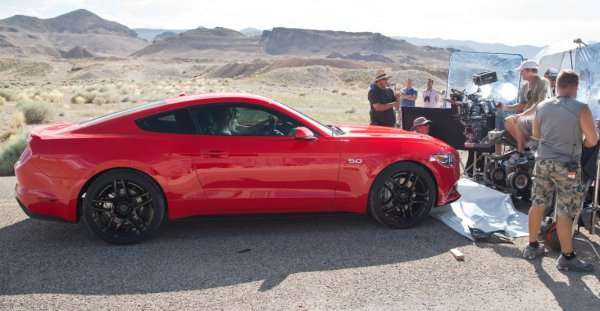 When the new Need for Speed movie debuts on March 14th, theater-goers will have their first chance to see the new 2015 Ford Mustang on the big screen – continuing a legacy that has made the mighty Mustang one of the most commonly featured cars in the history of the entertainment industry.
Advertisement

We have known for some time that the “hero car” of the fast paced street racing movie Need for Speed would feature a heavily customized 2014 Ford Mustang GT but Ford Motor Company recently announced that the new 2015 Ford Mustang GT would also make an appearance in the movie. This appearance in Need for Speed adds to the Ford Mustang’s Hollywood career that has immassed more than 3,200 appearances since the car was introduced back in 1964. Shortly after the original Mustang’s debut at the New York World’s Fair, the Ford Mustang was chosen as one of the lead vehicles in the James Bond movie Goldfinger and since then, the Mustang has appeared in thousands of movies and television shows.

“On-screen or on the road, the visceral sight and sound of Mustang has been inspiring fans for nearly five decades,” said Jim Farley, Ford executive vice president, global marketing, sales and service and Lincoln. “The feeling of optimism and being in control that Mustang’s world-class power and performance provide is a perfect match for Aaron Paul’s character in ‘Need for Speed.’”

To celebrate the upcoming silver screen debut of the 2015 Mustang GT, Ford has offered up a short trailer video showing the new Mustang in action with quotes from a variety of people involved with the movie including NFS lead man and Breaking Bad co-star Aaron Paul, Ford Mustang Chief Engineer Dave Pericak and Ford Mustang drift racer Vaughn Gittin Jr – who helped with the stunt driving in the Need for Speed movie. The car being used in the film is a Race Red 2015 Mustang GT just like the car that was introduced in the Detroit and LA area debuts.

“I chose Mustang because it is a car that really represents American culture,” said Need for Speed director Scott Waugh. “It just represents modern muscle, and it’s iconic, having been in some of the greatest car chase movies of all time.”
During Vaughn Gittin Jr’s piece in the teaser video below, he references the fact that he is driving the 2015 Mustang GT in its only scene so it sounds like the next generation Mustang won’t be playing a major role in the film but its role will be prominent nonetheless. The short clip showing the 2015 Mustang GT during the filming of the movie also presents an awesome (yet short) clip of the new muscle car doing a big nasty burnout as lead protagonist Aaron Paul speeds away from the scene. Of course, we also get a chance to hear the 420+ horsepower 5.0L V8 roar as the mighty Mustang roasts the rear tires.

I could go more about the 2015 Ford Mustang GT but its probably easier for you to crank up your speakers, kick back and enjoy the short behind the scenes clip from Need for Speed.