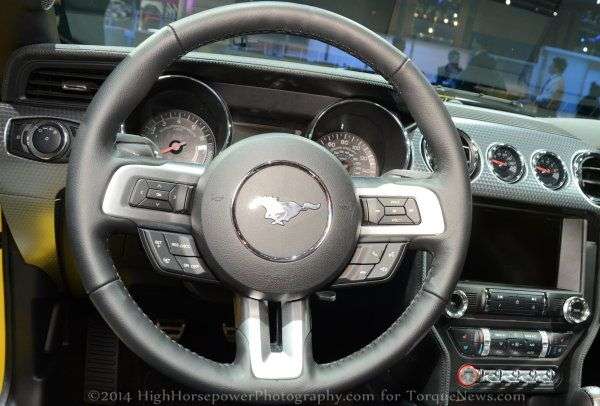 The auto show debut of the 2015 Ford Mustang gave us a chance to see the newest pony car in a variety of colors but more importantly – it gave me a chance to spend a few minutes sitting in the driver’s seat of the new Mustang GT to check out all of interesting interior features that are new to the 2015 Mustang.
Advertisement

The 2015 Ford Mustang is packed with modern infotainment technology and all of those features are integrated neatly into the redesigned center console. This includes a large touchscreen mounted almost even with the driver’s right hand so there isn’t a need to take your hands from far the wheel when making radio, navigation or climate control adjustments.

Below that large touchscreen is a set of simple buttons and knobs which offer basic stereo system controls with similar controls mounted on the right side spoke of the 2015 Mustang’s thick, sporty steering wheel. Below the sound system controls in the center stack is a climate control panel that combines everything in a small, tidy panel. This includes a button for the heated and cooled seats, a scrolling wheel to control temperature settings, and nine central buttons that handle all of the other climate control functions.

My favorite aspect of the 2015 Ford Mustang GT interior is the small switch panel located at the base of the center stack. This area includes the red trimmed push button start feature and four satin silver switches – one for the hazard lights, one for the traction control system, one for the adjustable steering modes and one for the drive mode selector.

I absolutely love how Ford has added these switches to the interior as they have a very race ready look and they serve to really spice up the cockpit even though they are a fairly minimal addition. These satin silver toggle switches are unique and they are far more interesting than just another strip of plain black buttons. It is unclear if this bottom switch panel will be standard on all 2015 Mustang models or if they are specific to the Mustang GT but those Mustang owners who get these styling controls are sure to love them. All said and done, Ford Motor Company has done a beautiful job of integrating all of the controls of the various high tech gadgets of the 2015 Ford Mustang into a small, sharp looking control panel tucked neatly into the center stack. In a day and age where lots of tech features means a massive buttonfest that makes the driver’s area feel like the DeLorean from Back to the Future – the 2015 Mustang maintains the super clean muscle car feel with controls that are minimal but eye catching.