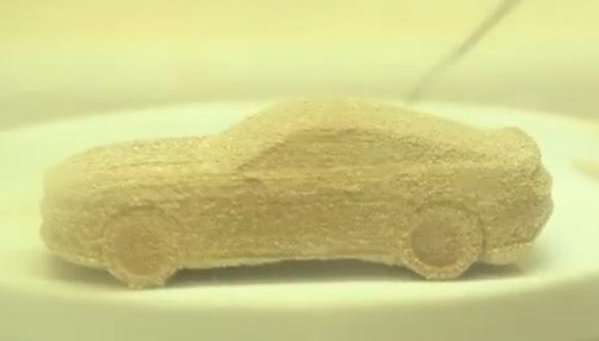 Ford used 3D printing to make a variety of the components of the new 2015 Mustang during the design process and to show off the versatility of 3D printing – the automaker has teamed up with 3D Systems to make sugar and chocolate miniature versions of the 2015 Ford Mustang.
Advertisement

3D printing is becoming a major part of the engineering and design world so it shouldn’t come as much of a surprise that a variety of components of the 2015 Ford Mustang were created during the prototype phase to help make the new S550 Mustang. The hood vents, the front fascia, the interior air vents and some interior panels were created with 3D printing as the automaker built the first 2015 Mustang prototype. There were even components of the new 2.3L EcoBoost engine that were prototyped using 3D printing including the cylinder head, the engine block and the intake manifold. To celebrate and show off the innovation of 3D printing, Ford Motor Company teamed up with the 3 dimension printing specialists at 3D Systems to create the next generation Mustang in chocolate and sugar.

“3D printing is one of the hottest buzzwords in the news today and it’s great to see more consumers learning about the technology and its applications,” said Paul Susalla, Ford supervisor of 3D printing. “We wanted to create something fun to show that while 3D printing made these edible Mustangs, manufacturing-level 3D printing was used in the development of Ford’s all-new sports car.”

Ford Motor Company introduced these new miniature chocolate and sugar candy 2015 Mustangs with the video below that shows how the 3D printing company takes the CAD designs from the actual 2015 Mustang and scales it down to make the newest Ford muscle car into a sweet treat. They also use 3D printing to make a small scale 2015 Mustang out of plastic, but let’s be honest – the star of this show is a 2015 Ford Mustang made out of chocolate.

“Ford Mustang and chocolate is a recipe for success,” said Mark Bentley, Ford product licensing manager. “It is so exciting to see how these technologies enable a new way of telling a brand story.”

Some of you are probably reading this, asking yourself “where do I go to buy a chocolate or sugar candy 2015 Ford Mustang” and to that I have some bad news. Right now, the chocolate and sugar candy Mustangs were only made as a promotional piece to show off the capabilities of 3D printing and you cannot buy them. Fortunately, Ford is considering licensing out the production of these chocolate and sugar candy Mustangs so while they are not available in stores or online right now – they could be offered in the near future.

In my opinion, a 2015 Ford Mustang in chocolate or sugar candy (3D Systems can do white peppermint or sour apple) seems like the kind of item that would be loved by anyone who likes American muscle cars, the Ford Mustang or…candy. There certainly seems to be a clear business case for an edible 1/24 scale Mustang so I would expect that sooner or later we will be able to take a bit out of a tasty small scale 2015 Ford Mustang.