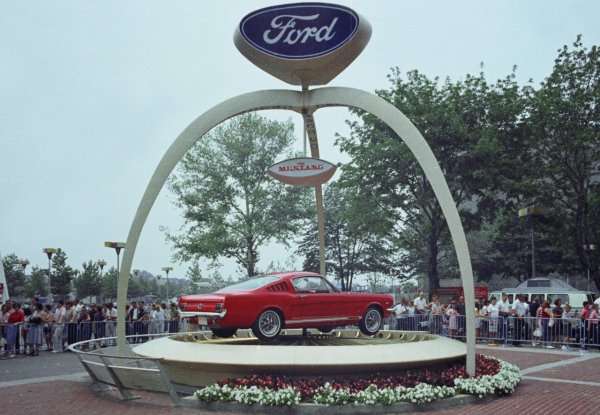 Ford Motor Company has big plans to celebrate the 50th anniversary of their famed Ford Mustang that will be capped off with the public introduction of the 2014 Mustang at the 2014 New York International Auto Show and today, we have a full list of the events that will allow enthusiasts to get in on the birthday celebration fun.
Advertisement

There are few cars sold in the United States – or anywhere in the world – that has the enthusiast following of Ford Mustang. Having been introduced back in 1964 at the New York World’s Fair on April 17th, the second media day of the 2014 New York International Auto Show will officially mark 50 years since the first Mustang was introduced to the world and, needless to say, this is a big deal for a great many people around the country. From Ford Motor Company to Mustang clubs all over America, there are events planned that will let Mustang lovers all over the US join in the 50th anniversary fun.

-First up, the Mustang Club of America has organized a cross country drive that will begin on April 10th in Los Angeles California and end up in Concord North Carolina; appropriately named the Mustangs Across America 50th Anniversary Drive. More than 500 Ford Mustangs are expected to join the caravan style cruise from coast to coast which will end up at Charlotte Motor Speedway.

-Next, beginning on April 13th in Norman Oklahoma is the Mustang Club of America Great American Pony Drive. This caravan style cruise will start in Oklahoma and have groups heading in two different directions – one towards Charlotte Motor Speedway in North Carolina and another headed towards Las Vegas Motor Speedway in Nevada.

-Beginning on April 16th and running through the 17th, Ford will have the 2015 Mustang Convertible on display atop the roof of the Empire State Building. After cutting the S550 Mustang into several pieces and shipping it to the roof by means of the narrow elevators, attendees to the building will be able to check out the new Mustang at one of the highest structural points in the world. This is open to anyone who visits the Empire State Building on those two days.

-The first big stationary event set to kick off the 50th anniversary celebration is held by the official Mustang Club of America, which will hold simultaneous events at Charlotte Motor Speedway and Las Vegas Motor Speedway from April 16th through the 20th. These events will include huge displays of Ford Mustangs from the last 50 years, Ford ride and drive sessions, car cruises and Mustang history information. These two events are the end point of the Mustangs Across America 50th Anniversary Drive and the Mustang Club of America Great American Pony Drive. These events are open to the public.

-To celebrate the actual day that marks the 50th anniversary, Ford will hold one event in Flushing Meadows New York and another at their Dearborn headquarters. Flushing Meadows Corona Park in New York was the location of the 1964 World’s Fair, so Ford has organized a small private event for local Mustang club members. Ford doesn’t specify that this is open to the public but if you are in that area on that day, you might be able to catch a glimpse of the festivities. On that same day, Ford will have a celebration event at the headquarters but that is open only to company employees.

-Next up comes quite a bit later in April as the Ford Car Club Council will host their Fabulous Fords Forever car show at Knott's Berry Farm in Buena Park California on April 27th. This event is open to the public.

-Finally, on May 3rd and 4th, the Peterson Museum in Los Angeles will host Mustang Madness. The Peterson Museum will celebrate the Mustang’s 50th birthday with special events in and around the museum, including special Mustang related guests like drift champ Vaughn Gittin Jr.

Of course, anyone who is making the trip to the Big Apple for the 2014 New York International Auto Show will get to check the 2015 Ford Mustang in person at the show and the Mustang will continue to be displayed at other auto shows around the country throughout the rest of the year.