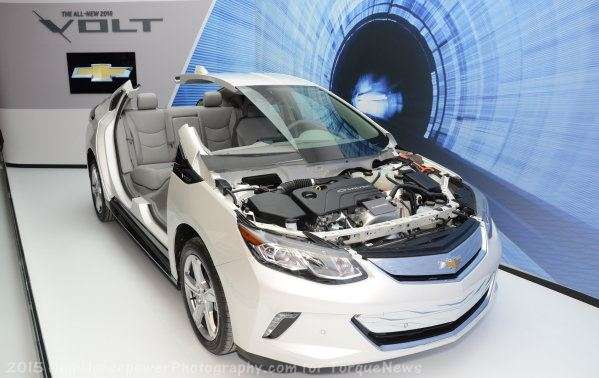 The 2016 Chevy Volt Costs Less than the Original

The new 2016 Chevrolet Volt debuted at the 2015 Detroit Auto Show with a new look, a greater all-electric range and improved fuel economy when the gasoline range-extending engine is being relied upon and now we know that this new and improved Chevy Volt will also cost less than the outgoing models.
Advertisement

When the Chevrolet Volt hit the market back in 2011, it quickly became the bestselling electric vehicle sold in America, routinely outselling the Nissan Leaf over the course of the first two years and leading the annual sales race in 2011, 2012 and 2013. However, a slow shift in sales allowed the Leaf to lead the American EV segment in 2014 so when General Motors took to freshening up the Chevy Volt, they knew that it needed to be way more than just an aesthetic upgrade.

"The next generation Chevrolet Volt delivers more technology, the ability to drive further between gas fill ups and now with even more value to our customers. It's what our loyal Volt owners told us they wanted," said Steve Majoros, Director, Chevrolet Marketing. "We are confident we will continue to attract new customers to Volt with the vehicle's product improvements and attractive price."

The 2016 Chevy Volt
When the 2016 Chevrolet Volt debuted back in January at the North American International Auto Show in Detroit, we saw a Volt with a totally new exterior and a refined interior, but the next generation Chevy EV is far more than a pretty face.

The 2016 Chevrolet Volt will have an official electric range of 50 miles, while the current Volt can “only” hit 38 miles. Keep in mind, those are the official EPA figures, so real world numbers will vary. In my experiences with the current Chevy Volt, I was able to get better than 40 miles on a single charge without any extreme driving techniques (no hypermiling) and without relying on the range-extending engine. Based on those experiences, I would expect that an official range of 50 miles could realistically afford you as much as 55-60 miles in the right conditions with the right drivers.

Also, when the 2016 Chevrolet Volt is being driven on a low battery with the gasoline engine running, the next generation Volt will offer 41 miles per gallon where the current models offer just 38 miles per gallon. Best of all, the next gen Volt will no longer require premium fuel, so not only will 2016 Volt owners use less gas in general – they will also be paying less for the gas when they do need to fill up.

2016 Volt Pricing
So the 2016 Chevrolet Volt has better electronic range, better fuel economy, a roomier interior and a new exterior, but as we all know – vast improvements generally come with a price increase. Fortunately, that isn’t true of the new Volt, as the next generation model has a starting price that is $1,175 lower than the 2014 models. $1,175 might not seem like all that much of a discount to some, but when you consider the fact that the 2016 Volt is better in every way, you are not only paying less, but you are getting more for your money.

When combined with the new, lower price, the 2016 Chevrolet Volt stands to help improve EV sales in a big way with a new range and improved fuel economy when it reaches dealerships later this year.

mike w wrote on May 4, 2015 - 7:59pm Permalink
Patrick--great article. In the past GM has, at least with the Volt, under advertised and over delivered. your claim of getting more the 38 miles AER is realized by many Volt owners. I hope the trend continues and share your belief that the new Volt will easily deliver 50 miles AER. We have a Leaf and Nissan has over advertised and under delivered in terms of electric range and battery longevity. Chevy has released sale prices but I have not yet seen any lease prices announced yet-
JeffS wrote on May 5, 2015 - 7:30am Permalink
Good day. I think when you calculate the cost including the tax credit, the MSRP is not reduced by the 7500.00 Tax Credit, it is reduced by the amount of Tax one would pay on 7500.00, approximately 1000.00. So in terms of purchase price, after the tax credit, it would be about, 32995.00. I may be wrong on that as I am not entirely sure how the credit works, but do not think so.
Mark wrote on May 15, 2015 - 4:35pm Permalink
If one makes enough in the year to actually owe $7500 worth of taxes, depending on each individuals tax situation, one can actually receive the full $7500 back. It is a non refundable tax credit, not just a tax deduction. Again it all depends on one's specific tax situation however. Chevy's site has more information and links to government information.
JeffS wrote on May 16, 2015 - 8:41am Permalink
Hey Mike, right you are. Sorry my bad. After reading your comment I checked the Tax forms and indeed it is a, "Credit". Thanks for the correction. Be Well.
JeffS wrote on May 16, 2015 - 9:26am Permalink
Sorry MARK, I be a bit, "Dain Bread" in the morning. Be Well.
mike w wrote on May 16, 2015 - 7:35am Permalink
I saw an article similar to this one on another site. One of the commenters raised a good point. The price of the 2016 Volt has actually dropped almost $10,000 since it was introduced in 2011ish time frame. GM already slashed the price of the Volt some $5000 a year or so ago and with the $1175 drop announced today and taking into account inflation the price cut from the original model adds up to something like $10,000. Pretty impressive since the car's battery capacity has been increased. Few if any BEV manufacturers can show that they have dropped their prices and added range. Good job GM.
JeffS wrote on May 16, 2015 - 9:42am Permalink
Now that I understand the Tax credits, depending on one's income, (about 55 grand plus in taxable income for married, considerably less for single fillers, is the sweet spot for realizing the full 7500.00), makes the Volt, (and some other EV, Hybrid's) seem like a screaming Bargain. I also agree with you that GM has the upper hand with the Volt regarding this niche, (as far as what is available to the, "masses"). Be Well.