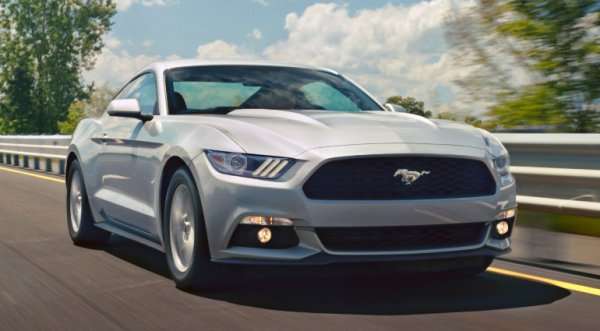 Ford Motor Company has issued a voluntary recall of the 2015 Ford Mustang EcoBoost over a concern that in the right situations, extreme underbody temperatures could cause damage to the fuel tank, the fuel system and the brake lines – leading to a myriad of possible problems and safety risks.
Advertisement

The 2.3L EcoBoost 4-cylinder engine is arguably the biggest deal with the 2015 Ford Mustang outside of the new generation styling itself. While some insisted that a 4-cylinder muscle car was doomed to fail, the output of 310 horsepower and 320lb-ft of torque combined with the best fuel economy in the segment have made the EcoBoost a very popular option for those prospective 2015 Mustang buyers who don’t feel the need to feed the 5.0L V8.

This early popularity has led to strong sales of the 2015 Ford Mustang EcoBoost package, but the Motor Company has discovered an unusual problem with these fuel-sipping 4-cylinder muscle cars, as extreme underbody temperatures could lead to a handful of different problems which could cause some very serious safety risks. The company hasn’t had any reports of this recall issue causing any sort of accidents or injuries in the hands of a private owner, but with so much potential for problems – Ford is making the quick decision to get the new turbocharged Mustangs back to dealerships for a few repairs.

The Mustang EcoBoost Underbody Heat Recall
This new 2015 Ford Mustang EcoBoost recall could be one of the most unusual I’ve covered in my years in the industry, perhaps second only to the Mazda models recalled for spiders building nests in the fuel tank vent tubes. This recall applies to 2015 Mustang fastbacks and convertibles with the 2.3L EcoBoost engine that were built between February 14th and February 10th 2015, with a total of 19,486 units affected (19.095 in the US, 391 in Canada).

The Problem
The 2.3L EcoBoost 4-cylinder is a very impressive engine, delivering 310 horsepower and 320lb-ft of torque while still being the most efficient engine in the muscle car segment. One downfall to this new EcoBoost engine (and many turbocharged engines) is an excessive buildup of heat under the vehicle. The turbocharger itself technically obstructs exhaust flow, so the gas builds heat while the turbo itself gets very hot. From there, the hot air travels through the catalytic convertor, where more heat is generated before being sent through the exhaust system and out the back end of the car. As this super-heated air passes through the metal exhaust system, it passes various fuel lines, brake lines and the fuel tank.

Unfortunately, Ford Motor Company has found that the temperatures being created by the exhaust system of the 2015 EcoBoost Mustang are much higher than expected, and the automaker is concerned that this excessively high heat could cause the parking brake cable seals to fail or it could cause both the fuel vapor lines and the composite fuel tank to deteriorate. Should the parking brake cable seals fail, the parking brake could fail to operate as expected and in the case of a manual transmission model, the Mustang could roll away. Of course, should the fuel vapor lines or the fuel tank fail, a simple ignition source could cause a massive fire under the car.

As mentioned above, there have been no reports of accidents, fires or injuries in the 2015 Ford Mustang EcoBoost.

The Fix
The repair for this 2015 Ford Mustang EcoBoost recall is fairly simple, as the dealership will install a new fuel tank shield, new thermal wrapping in the fuel vapor lines and new thermal wrapping on the parking brake cable. There has been no exact timetable for this recall, but EcoBoost Mustang owners can expect to get notification from the company very soon if they have not already.

LG's New EV Battery Plant Is a Welcome News for Tesla
Tesla Giga Berlin's New Hurdle: It's Not Only the Gov't, but Now Tesla Itself
END_OF_DOCUMENT_TOKEN_TO_BE_REPLACED