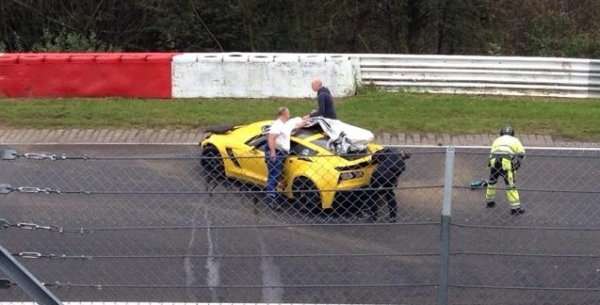 Last week we had our first video showing the 2015 Chevrolet Corvette Z06 lapping the famed German Nürburgring and today, we have our first image of the new C7 Z06 badly crashed at the Nürburgring – an accident which was rumored to have happened while General Motors was working on setting a new record time with the “most track capable Corvette ever”.
Advertisement

Anyone who follows what goes on at the Nürburgring knows that wrecks are not uncommon, but it is unusual to see a hot, new model driven by an automaker’s key test driver like the new Chevrolet Corvette Z06 broken to pieces and scattered across the graffiti covered German road course. However, the image above showing a wrecked C7 Corvette Z06 at the Nürburgring was caught by Twitter user Herr_Incredible, showing that the videos we saw last week may not have had such a happy ending.

The Wrecked Z06 at the Ring
Very little is known about the ongoing tests of the 2015 Chevrolet Corvette Z06 at the Nürburgring that resulted in our first look at a badly wrecked C7 super-Vette, but rumors floating around the internet indicate that this Velocity Yellow Z06 appeared to be in full production form and it appeared to be fitted with all of the go-fast goodies offered for the 650hp supercharged monster. The rumors also indicate that GM is in Germany with the intent of making a proper Nürburgring record run, while likely also making some high definition videos for gearheads around the US to drool over. Unfortunately, that new record time and those incredible videos will have to wait, as the image above serves as a saddening end to anything important going on with this 2015 Z06.

I am not 100% sure, but I do believe that could be Corvette engineer and regular test driver Jim Mero reaching over the roof of the car for the cover. Mero has been behind the wheel for the three previous best Ring times by a Corvette so if that is Mr. Mero wearing the blue driving suit that is tied down around his waist, it supports that rumors that GM was looking to lay down a new record – at least for the Corvette. Click here for a closer look at the videos of the C7 Z06 in action on the Ring.

While it is obviously hard to see from this angle, it certainly appears that the front end of the Corvette is quite a bit shorter than normal and the copious amount of oil dry being swept up by the track worker on the far right would lead me to believe that the front end hit something hard enough to break into the LT4 V8’s cooling and/or oiling system. According to the person who posted the image on Twitter, the crashed occurred in the Hatzenbach section of the track, which is said to be one of the more technically difficult portions of the legendary course.

Good News on the Horizon for GM Fans
While it is surely breaking the hearts of some Corvette fans to see the almighty 2015 C7 Z06 crunched up on the world’s most grueling race course, rumors from around the Nürburgring indicate that this was not the only new Z06 in the area – as there has also been a blue supercharged Vette spotted in and around the racing complex.

While this wrecked yellow Z06 might be a setback in GM’s effort to set a new Corvette record lap time at the Nürburgring, I would bet that they will take to testing another model right away. After all, calling the 2015 z06 the most track capable Corvette of all time basically requires them to lay down a better Ring time than they did with the C6 Corvette ZR1 back in 2011.

Source: Herr_Incredible on Twitter (Thanks to Belgian Max for the heads up!)

Bobby Dahl wrote on October 7, 2014 - 10:32am Permalink
For it to be a "Nürburgring Record Run," wouldn't it have had to break a record? I think what you meant was, GM was likely attempting a record at the Nürburgring when the keys fell out of the ignition locking up the steering, and then the airbag failed, and that new Vette motor spun a bearing and had to be towed away, just like many Vette owners' situations.
Tim Higdon wrote on November 13, 2014 - 11:49am Permalink
FYI Bobby it's an Engine not a motor !
Paul wrote on December 17, 2014 - 4:04pm Permalink
Makes you wonder what Bobby Dahl drives?