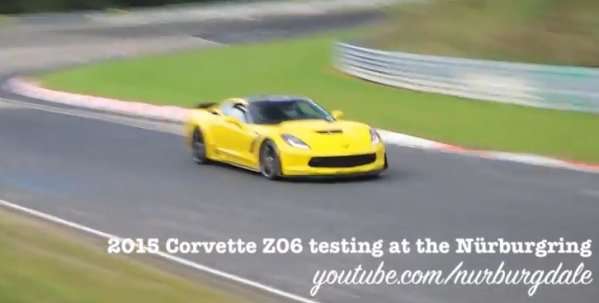 The 2015 Chevrolet Corvette Z06 is billed by General Motors as the most track capable Corvette of all time so it should come as no surprise that the automaker is putting the new super Vette through the paces at the world’s most grueling road course – and today we have video of the 2016 Z06 testing on the German Nürburgring.
Advertisement

Unless you live under a rock or drive an EV, you are likely aware that the Nürburgring in Germany has become the key proving grounds for monster performance vehicles like the 2015 Chevrolet Corvette Z06. Whether it is a Japanese supercar, an American muscle car, an Australian ute or a European hot hatch – proving your meddle in the performance world requires a trip to “The Green Hell” to show that your ride can lay it all out on the 12+ mile road course and in proving that the 2015 Z06 is truly the most track capable Corvette ever – it should go without saying that an impressive Nürburgring lap time is very important.

We knew that the 2015 Chevrolet Corvette Z06 would show up at the Nürburgring with the hopes of breaking some records and thanks to the BridgetoGantry YouTube account, today we have our first look at the new Z06 blasting along the pavement of the famed German road course.

The C7 Corvette Z06 at The Ring
In case you haven’t already jumped down to the video of the 2015 Chevrolet Corvette Z06 at the Nürburgring, here is a quick spoiler for you – there are no lap times of any sort included in this video. While I would most certainly expect to see a very nicely produced official video from General Motors with an in-car camera and a telemetry setup that shows the Corvette’s progress around the track with full lap timing information, this is not that video. Instead, this is a video captured from a spectator’s angle along the side of the track so we don’t get to know what kind of lap times the new Z06 turned.

However, this is the first footage of the 2015 Corvette Z06 rocketing around the Nürburgring and some of the most interesting live footage of the most track capable Corvette of all time doing what it does best. This video gives us a chance to watch the new Z06 hammer a few turns and rocket down a straightaway with the new supercharged LT4 engine providing the lovely sound track. We also get a chance to hear the difference between the new Corvette Z06 and what looks like a newer BMW M5 – possibly the well-known “Ring Taxi”.

Why is the Corvette Z06 at The Ring?
There are two likely reasons for General Motors to have the 2015 Chevrolet Corvette Z06 at the Nürburgring and, honestly, they could really be two reasons exercised at once.

First and foremost, GM is billing the 2015 Corvette Z06 as the most track capable Corvette of all time so intense testing on the world’s most famous and most grueling road course is almost a must. If the Z06 can handle The Green Hell in an acceptable manner, it will be able to handle any other road course in the world. Now that we know everything that there is to know about the new Z06, the company is free to perform the final tests ahead of production without worrying about the annoying spy photographers.

Second, being the most track capable Corvette of all time means beating the previous C6 Corvette ZR1 and what better place to do that than the world’s most well-known road course. It is nearly impossible to call the C7 Z06 the most track capable Corvette ever if it isn’t capable of beating the C6 ZR1 so along with the final phases of testing for the new super Vette – this Z06 could be in Germany with the goals of breaking the ZR1’s Ring record.

The 2012 Chevrolet Corvette ZR1 set the bar for production road cars back in July of 2011 with a time of 7:19.63. That time was later beaten by the Lexus LFA in August 2011, the Dodge Viper in September 2011, the Nissan GTR in September 2013 and the Porsche 918 Spyder – also in the fall of 2013. There are also a handful of road legal race cars like the Radical SR8, the Gumpert Apollo and the Donkervoort D8 which turned better times than the C6 Corvette ZR1, but among actual production cars that people drive every day, the top five cars to lap the Nürburgring are listed below.

For the 2015 Chevrolet Corvette Z06 to prove itself as the most track capable Corvette ever, it would need to turn in a lap time quicker than 7 minutes and 19.63 seconds. I fully expect to see the C7 Z06 break the C6 ZR1 lap record, but edging out the other cars on that list above will be a big task. The new Z06 does have more power and better aerodynamics, but it also weighs more than the ZR1 and that could make it tough to defeat the LFA and the Viper which were just a few seconds quicker than the ZR1. I do, however, believe that GM will work to get a quicker time for the new Z06 than what was posted by the 2010 Dodge Viper…but I have my doubts that the Corvette Z06 will catch the new Nismo GTR.

Hopefully with this first video of the 2015 Chevrolet Corvette Z06 on the Nurburgring, an official video with a smokin’ fast lap time will surface soon. In the meantime, crank up your speakers and enjoy this video the new C7 Z06 attacking the world’s most grueling road course.