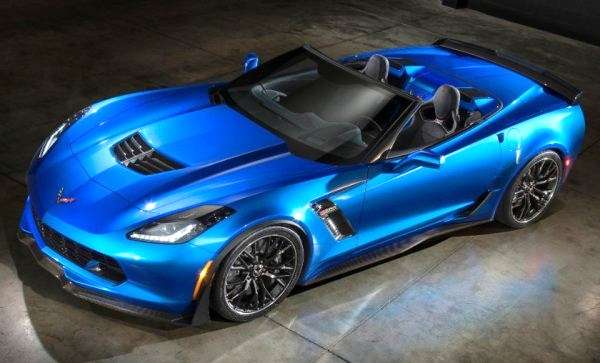 When the 2014 New York International Auto Show opens later this week, the new 2015 Chevrolet Corvette Z06 Convertible will meet the world and when it does, it will mark the first time that General Motors has offered one of their modern Super-Vettes in convertible form – adding yet another item to the list of reasons why the C7 Corvette is so freakin’ awesome.
Advertisement

While General Motors has offered plenty of high end, higher performance Chevrolet Corvette models in the past few generations like the C4 ZR-1, the C5 Z06, the C6 Z06 and the C6 ZR-1, but none of them have been offered as convertibles. GM offered these highest performance models only as coupes because the structural design of convertibles has, historically, been significantly heavier than the coupe version of the same vehicle. For instance, a 2014 Chevrolet Camaro SS Convertible is 264lbs heavier than the 2014 Camaro SS Coupe and this weight difference is caused by a combination of the convertible top components and the chassis reinforcements needed to make the car sturdy enough for road use. Fortunately, the super strong aluminum frame of the C7 Z06 is so strong that there is no need for additional support – allowing the 2015 Z06 Convertible to have a curb weight that is “nearly identical” to the 2015 Z06 Coupe. “Until recently it was not possible to create a lightweight, open-roof structure strong enough to cope with the braking, cornering, and acceleration of Corvette’s top performance models,” said Corvette chief engineer Tadge Juechter. “The frame for the Z06 convertible leverages advancements in computer-aided engineering, metallurgy, and manufacturing techniques – many of which were not available just five years ago.”

The 2015 Chevrolet Corvette Z06 Convertible will feature all of the same performance goodies as the Z06 Coupe, starting with the new supercharged 6.2L LT4 V8 packed under the unique hood. GM is still saying that this engine will offer “at least 625 horsepower and 635lb-ft of torque”, which will make the C7 Z06 Convertible the most powerful droptop Corvette of all time – which is a pretty impressive claim considering some of the big block monsters from the earlier Corvette generations. All of that power is put to the rear wheels via the buyer’s choice of a 7-speed manual transmission or an 8-speed automatic while GM’s Magnetic Selective Ride Control system works with the ultra high performance carbon ceramic brakes to offer the same world class handling as the Z06 Coupe. All in all, there is a pretty good chance that the 2015 Corvette Z06 Convertible will be the best performing American convertible of all time. “The Z06 Convertible is a world-class supercar in every sense,” said Mark Reuss, executive vice president, Global Product Development. “Only a handful of convertibles in the world bring more than 600 horsepower and 600 pound-feet of torque. Even fewer can match the advanced technologies, aerodynamic design, and visceral driving experience of the Z06 Convertible.”

With the exception of the area replaced by the convertible top, the 2015 Chevrolet Corvette Z06 Convertible is pretty much identical to the Z06 Coupe in terms of aesthetics and aerodynamics while the convertible top and the rear tonneau are similar to those featured on the basic Stingray Convertible. This all adds up to one awesome looking C7 Corvette Z06 that offers the incredible performance of the Z06 Coupe with the freedom of topless driving that Corvette fans have wanted for so long.

The 2015 Chevrolet Corvette Z06 Convertible will make its grand debut later this week at the 2014 New York International Auto Show and I have my fingers crossed that the debut of the Z06 will include full specs for both the Convertible and Coupe version of the most track capable Corvette ever. In the meantime, click any of the thumbnails above to check out our gallery of the new droptop Z06.