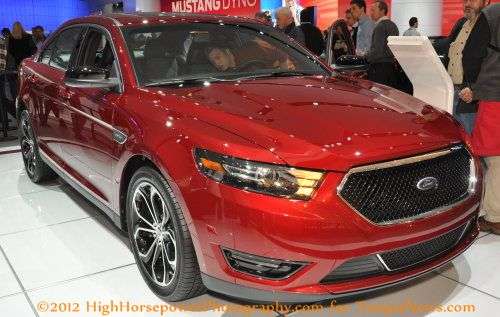 Pricing is available on the official Ford Vehicles website and the refreshed 2013 Ford Taurus SHO sports a price increase to go along with the new look – with a price for the high performance full sized sedan starting $1,045 more than the 2012 Taurus SHO.
Advertisement

The 2013 Ford Taurus SHO packs the same 3.5L EcoBoost V6 at the 2012 models, sending 365 horsepower and 350lb-ft of torque to all four wheels via an advanced all wheel drive system and a 6-speed automatic transmission featuring paddle shifters mounted on the steering wheel. The key differences begin on the outside, where the 2013 SHO wears a unique upper grille flanked by HID headlights and the lower fascia also sports a revised grille opening along with LED foglights mounted towards the outside of the front end with a new shape and design compared to the 2012 model year SHO. Along the sides of the car, the 2013 Ford Taurus SHO wears new 19” aluminum wheels, a unique SHO badged on the front fender and black mirrors that are also specific to the SHO package. Out back, the subtle changes continue with a low profile spoiler atop the trunk lid and new taillights.

The differences that are less noticeable to the eye but will make a bigger impact on the open road with the 2013 Ford Taurus SHO begins with the revised sport tuned suspension, a new torque vectoring system and an electric power-assisted steering (EPAS) that has been calibrated specifically for the 2013 SHO. Ford has also fitted the new SHO with an enhanced performance braking system that includes a larger master cylinder, a revised brake booster system, and larger front rotors – all of which combine to give the large sedan much better stopping power than the outgoing 2012 models.

The new look of the 2013 Ford Taurus SHO and the improved standard performance features are all great news for those in the market for a new performance sedan but these improvements come with some bad news – as the 2013 SHO carries a starting price $1,045 higher than the outgoing model with a base price starting at $39,995 (including a $795 destination fee). While a price increase is never what a prospective buyer hopes to hear, we fully expected that the performance and aesthetic changes made to the 2013 SHO would raise the price and in this day and age; a thousand dollar jump for a new look, new suspension, new tires, new wheels and new brakes is a small price to pay.

There is more good news for the 2013 Ford Taurus SHO, as Ford has improved the SHO Performance Package for the new model year. This package begins with unique (and strikingly good looking) 20” painted wheels with machined faces wrapped in high performance summer tires (shown in the image on the right). These new shoes work with a SHO Performance Package-specific sport tuned suspension setup featuring stiffer springs, tuned shocks, and a stiffer stabilizer bar for supreme handling. The braking system of the 2013 SHO is improved compared to 2012 but the SHO Performance Package takes that one step further with high friction brake pads and unique brake calipers designed for track use while a recalibrated EPAS system and Electronic Stability Control System featuring the ability to completely disable the system in Track Mode. Finally, to improve the acceleration of the 2013 SHO, the Performance Package adds a 3.16 to 1 final driver ratio and a heavy duty cooling system works to keep the twin turbocharged EcoBoost nice and cool during long stints on the track. Like the car itself, the SHO Performance Package for the 2013 Taurus SHO will cost buyers more than the similar package in 2012 – with this track-prep setup costing $1,995 (the 2012 package was $995).

Ford is currently running the 2012 Taurus SHO and the rest of the 2013 Taurus lineup on the Ford Vehicles website and for more information on buying a new SHO – head to your nearest Ford dealership to reserve your high performance Ford sedan.