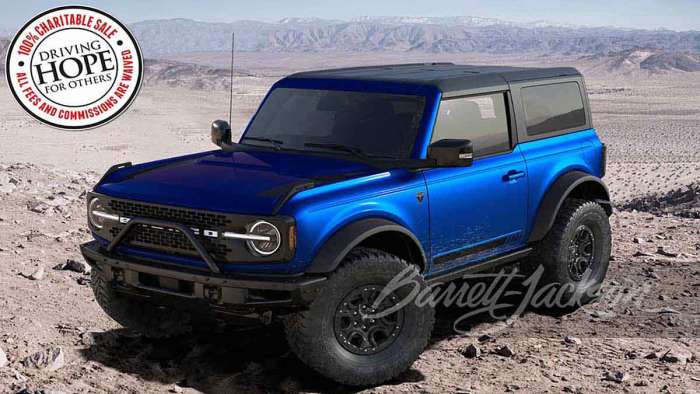 VIN001 First Edition two-door Ford Bronco and Mustang Mach 1 will be part of history at Barrett-Jackson in March. Bronco sale will benefit National Forest Foundation and Outward Bound while proceeds from the Mach 1 will benefit JDRF, a juvenile diabetes organization.
Advertisement

I’ve written a lot about the Barrett-Jackson auction lately. This outstanding auction is billed as the World’s Greatest Collector Car Auctions, and it really is. As I said prior, put this on your automotive show bucket list.

There are already two very special Mustangs on the block including the first production 2010 Roush Mustang and a special collaboration between Barrett-Jackson and Fender making a unique Mustang.

Now there’s another very special Mustang as well as a very special 2021 Ford Bronco that will be hitting the block during the Scottsdale Auction at WestWorld of Scottsdale, March 20-27, 2021.

The two-door and four-door Bronco is back after a 25-year hiatus. We’ve written a lot about the Bronco in all its ups and downs since its launch last summer. The demand, to say the least, is high for the Bronco. So hearing that one person can bid and buy VIN001 of the two-door 2021 Ford Bronco should be a huge draw during Barrett-Jackson.

According to Barrett-Jackson, one-hundred percent of the hammer price from the Ford Bronco VIN 001 will benefit National Forest Foundation and Outward Bound, which are part of Ford’s new Bronco Wild Fund mission to connect people to the outdoors.

If that wasn’t a big enough draw, VIN001 of the Mustang Mach 1 will also hit the block with total sale price benefiting JDRF’s efforts against type 1 diabetes.

We already know 2021 is one of the biggest years in Ford’s recent history. Having two VIN 1 vehicles from this year available to bid is quite a get for Barrett-Jackson.

“The 2021 Ford Bronco 2-door VIN 001 and 2021 Mustang Mach 1 VIN 001 are born from two of the world’s most fabled vehicles,” said Craig Jackson, chairman and CEO of Barrett-Jackson. “The return of these two models is among the most celebrated of our time. I’m really excited about both of these reborn icons selling on our auction block and, since I own a vintage Bronco myself, am particularly interested to see what VIN 001 of the new model will bring. These two vehicles will help write collector car history as part of our Scottsdale docket, which features the most VIN 001 and first-production vehicles ever offered at a single auction.” 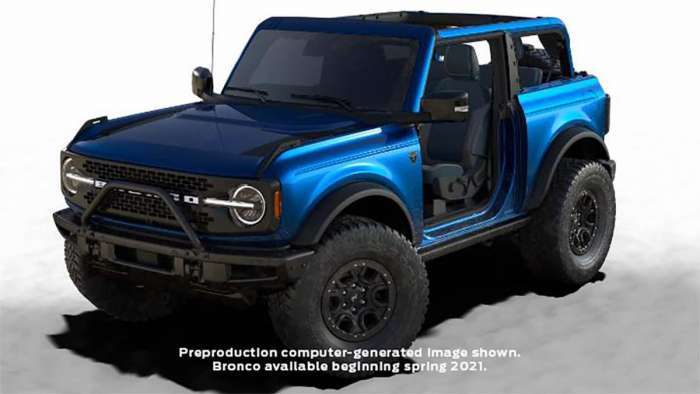 2021 Bronco 2-door VIN 001
The legendary Bronco has returned after 25 years. The first of only 7,000 First Editions built for the 2021 model year, the fully loaded 2021 Bronco 2-door VIN 001 features the mechanical components of the Badland Series, the Sasquatch Package and is finished in Lighting Blue. It is powered by a V6 EcoBoost that delivers approximately 310 horsepower and 400 ft/lbs of torque and is equipped with the HOSS System, which includes front and rear locking axles, as well as independent front suspension.

This Bronco has factory 35-inch tires and is equipped with seven G.O.A.T. modes to go over any type of terrain. 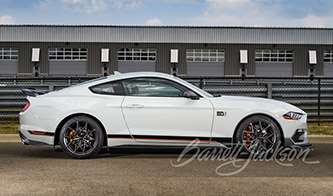 2021 Ford Mustang Mach 1 VIN 001
Sadly the GT350 was discontinued after 2020. While this was a great pony car, one of the best ever in fact, it is being replaced by the Mach 1 which returns to the Mustang stable after a 17-year hiatus.

This limited-edition Mach 1 features a 480-horsepower V8 engine mated to a 6-speed manual transmission and the track-ready Handling Package. Clad in Fighter Jet Gray, which is exclusive to the Mustang Mach 1, the exterior features a new front fascia, exclusive wheels, orange accents and special edition badges that celebrate its 50-plus year heritage.

The Mustang Mach 1 adds to the pony car tradition and 100 percent of hammer price of the VIN001 Mach 1 will benefit JDRF.

“Ford perfectly incorporated the spirit of the original Bronco and Mustang Mach 1 into their latest models,” said Steve Davis, president of Barrett-Jackson. “While each is purpose-built for the track or off-road, both remain true to their heritage. We couldn’t be prouder to work with Ford on the sale of these two legendary vehicles. Not only will they make history as VIN 001s, but their sales will drive change through the charities they benefit for years to come.”

Between the 2010 Roush, the Stratocaster 69 Mustang and these two VIN001 vehicles, Barrett-Jackson is loaded with great vehicles for Ford enthusiasts.

Check out what this Bronco went for at the recent auction here in Marc Stern's story. Leave me your thoughts in the comments.