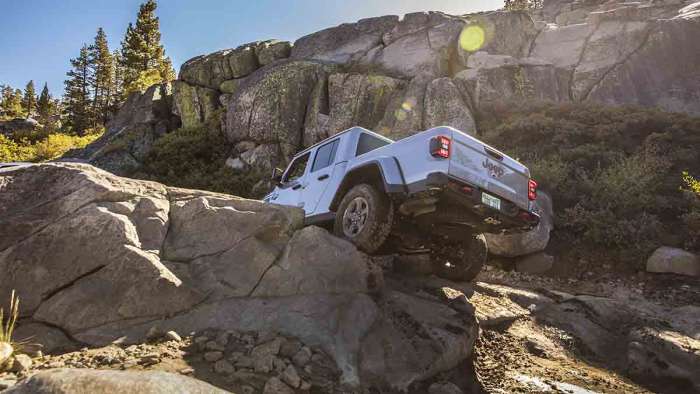 “The new Jeep Gladiator is the truck many buyers have been waiting years for,” said FOUR WHEELER Editor Ken Brubaker. “After a week of testing in a variety of challenging environments the Gladiator proved that it is all truck and all Jeep, which is a formidable combination. Mix in the impressive Rubicon package that includes Tru-Lok differential lockers, Rock-Trac transfer case with 4:1 low range, front disconnecting stabilizer bar, and full skidplating, and it’s clear the Gladiator is at the front of the class.”

How Trucks Are Tested

Competing trucks are put through a series of tests. FOUR WHEELER began the competition in Los Angeles with ramp travel index (RTI) testing to gauge each vehicle’s suspension articulation. Following RTI testing, the trucks were driven to the Auto Club Speedway in Fontana, California, for track testing, including 0-60 and quarter-mile acceleration times, as well as 60-0 braking distance. According to FOUR WHEELER, following track testing, the vehicles were driven to the Southern California desert on paved roads. Judges included staff from various 4x4 brands including FOUR WHEELER, 4-WHEEL & OFF-ROAD, and JP MAGAZINE.

The next three days were spent primarily in a variety of off-road conditions, including sand, rocky trails, loose-surface trails, and snow. Testing included a loose-dirt hill climb and water crossings. Night driving was also integrated into the competition to gauge each vehicle’s lighting equipment.

“When the Gladiator was first announced there was concern that it would be too much truck and not enough Jeep, or too much Jeep and not enough truck,” said MOTORTREND GROUP Content Director Sean P. Holman. “If anything, our testing has proven that Jeep has hit the sweet spot with the Gladiator, giving customers one of the finest off-road-capable midsize trucks on the market.”

Off-road, the Gladiator scored high marks due to its surefooted abilities. Judges appreciated the seamless way the off-road-centric features of the Rubicon package integrated with the truck’s inherent off-road capabilities, which culminated in a vehicle that excelled off-road. The Gladiator also impressed with its approach and departure angles, as well as the vast amount of underbody and exterior protection and ease of use and function of the locking differentials. The Gladiator’s suspension was tuned for on-road driving without compromising its outstanding off-road performance. Suspension flex on the trail helped the mud-terrain tires keep in contact with the trail when the going got tough.

Judges praised the 3.6L V-6 engine, noting that it provided ample power to propel the Gladiator over the toughest terrain or confidently up a long mountain grade. High marks were given to the Gladiator’s cargo bed, with judges noting that its design and function puts it on par with any pickup truck on the market. What’s not on par with any other pickup truck on the market was the Gladiator’s unique, specific features like the fun retractable soft top, which is a segment exclusive, that judges enjoyed both on- and off-road.

FOUR WHEELER is part of the Motor Trend Group and has been a leading 4x4 authority since 1962.

Jimmy Dinsmore has been an automotive journalist for more than a decade and been a writer since the high school. His Driver’s Side column features new car reviews and runs in several newspapers throughout the country. In addition to being a nationally syndicated automotive columnist, Jimmy has been published in a compilation book about children growing up with disabilities, where he shared his own very personal experience. He is also co-author of the book “Mustang by Design” and “Ford Trucks: A Unique Look at the Technical History of America’s Most Popular Truck”. Also, Jimmy works in the social media marketing world for a Canadian automotive training aid manufacturing company. Follow Jimmy on Facebook, Twitter and LinkedIn. You can find most of Jimmy's stories at Torque News Ford, where you can read daily Ford news stories from Torque News expert automotive reporters.