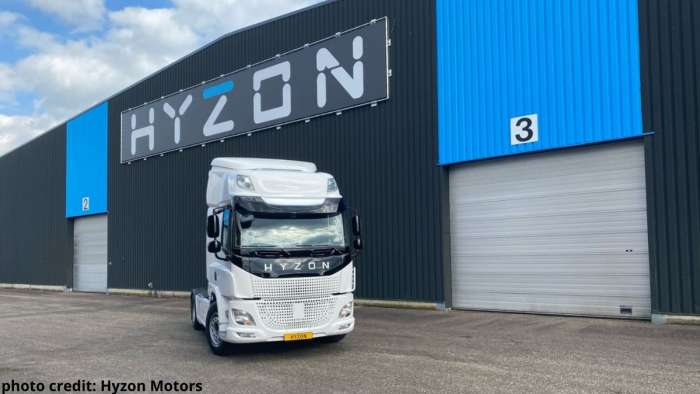 If you think HFC is a waste of resources, you may want to re-think that strategy. EVs may get all the hype but it certainly has not slowed the wheels of progress.
Advertisement

What would you do if you owned a company that makes and sells hydrogen fuel cell semi-trucks and were recently merged with a company that could write you a blank check?

Well, if you are Hyzon Motors, you would ramp up production and start shipping trucks. You would also be preparing to take on the United States market.

Say What?
You heard me. Hydrogen fuel cell semi-trucks are being shipped to customers from Hyzon Motors. This company which recently merged with Decarbonization Plus Acquisition Corp., is pushing hard for HFC.

Why HFC Is Not Dead
HFC or Hydrogen Fuel Cell never died; EVs stole the limelight. HFC technology has a ton to offer, and we do not hear much about it because of how Elon Musk has put it to shame.

HFC for semi-trucks is an excellent way to reduce diesel usage and help provide far cleaner air heavily. Hydrogen is the most abundant element on earth, but that does not mean it is easy to come by.

The infrastructure is almost non-existent, which is a significant challenge. Companies such as Toyota Motor have been pushing the HFC initiative but with little to show for it.

The entire fueling system will need a significant overhaul and build before these semi-trucks can run long distances.

Conclusion
This sneak attack, by Hyzon, tells me that there is far more to this HFC that we give it credit. I think that giant companies like the one mentioned and others like Toyota Motors are quiet about it for unknown reasons.

The EV revolution does have the limelight, but with the alternative fuel battle raging on, HFC will have a place.

Thank you all for reading. Remember, Today's Adventure is Tomorrow's Story.

Why do you think catalytic converter theft is still on the rise? Here is my take on it.