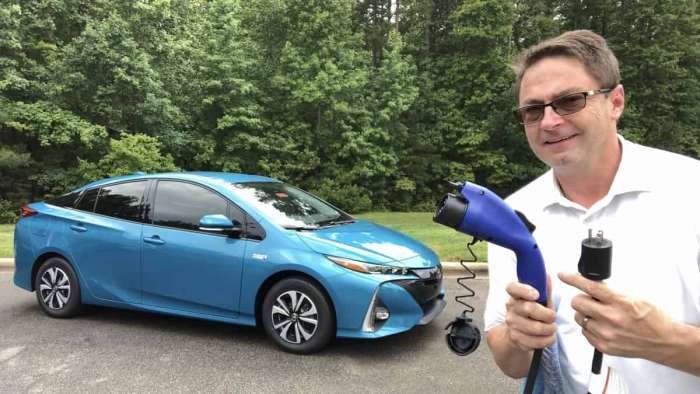 Car buyers have been attracted to the Toyota Prius for over two decades, due mainly to its incredible gas mileage. The 2019 Prius Prime offers drivers the opportunity to make that morning commute and save big on gas. Here are key essentials about 2019 Prius Prime you need to know.
Advertisement

The Toyota Prius is the best-selling hybrid of all time. Due to its long-term reliability and excellent fuel efficiency, Prius is an excellent choice both as a new and a pre-owned purchase.

One of its many offerings is the 2019 Prius Prime. This Plug-in hybrid vehicle makes efficient use of both gasoline and electric to give drivers the best gas mileage possible. But how does it work?

Prius Prime can drive the wheels using both its gasoline engine and electric motors, with a smooth-operating system called series parallel hybrid system. If the battery is fully charged, Prius Prime runs on the electric motors only. When the battery runs out, it operates like the traditional Prius we all know and love, using both the gas engine and electric motors to drive the car as they are needed. Speaking of batteries. If you are a regular Hybrid Prius owner, don't buy a new Toyota Prius Hybrid Battery - have it repaired instead.

Let’s jump right into it. There are many important buying criteria shoppers have when researching hybrids to purchase. The chief one, though, is nearly always fuel economy – and how much you can save at the pump.

Toyota Prius Prime offers a couple different ways to measure your gas mileage. First, when using purely hybrid mode, which is the combination of gasoline and electric modes, drivers can expect 54MPG (55 city / 53 highway). This is terrific fuel efficiency on its own.

However, when utilizing EV (Electric Vehicle) mode, 2019 Prius Prime scores an EPA-rated 133MPGe rating. To reach this maximum MPG potential, it is best to capitalize on driving as much as possible in EV electric mode. An ideal situation would be when commuting to and from work each day.

After fully charging your 2019 Toyota Prius Prime, you can drive up to 25 miles on a full charge. Imagine you live 19 miles from your job. You can plug in and charge your Prime overnight, then drive to work. Plug it in again and it will be charged before you leave for home. Then drive back in EV electric again. Rinse and repeat.

Watch as I review 2019 Prius Prime Advanced and what makes it so special as well as subscribe to Torque News Youtube Channel for daily Toyota and Auto news.

But how long does it take to charge a Prius Prime?

When plugging into your standard grounded outlet at home, Prius Prime’s battery can be charged in around 5 hours and 30 minutes. It’s the old “charge while you sleep” technique (or something like that).

If you use one of the many public charging stations (240V) springing up all around, 2019 Prius Prime can be fully charged in approximately 2 hours and 10 minutes.

Aside from the fuel efficiency a car achieves, the other important gasoline question is how far can a person drive on one tank of gasoline. What if you have a trip planned up the coast next weekend? How many times will you need to fill up?

The Toyota Prius Prime delivers a driving range of about 640 miles (EPA-estimated, of course). To put things in perspective, this is driving from New York City to Myrtle Beach, SC on one tank of gas. Or imagine being able to travel from Los Angeles to Seattle and only needing to fill up one time. Road trip anyone? Bueller? Bueller?

A family of four is ideal to ride in a 2019 Prius Prime. But not five. Due to a number of limiting factors, among them adding more weight and lowering fuel estimates, Toyota decided to go with two seats in the second row with a nice large armrest with storage space instead of that 3rd middle seat. A good compromise, but still no 3rd seat.

Have no fear, though. Toyota is slightly modifying its 2020 Prius Prime entry this summer. It will have three seats across the 2nd row to accommodate five passengers. Nice work Toyota!

This perfectly sums things up. It comes from one of my readers who is incredibly proud of the MPG her family is getting from the Prius Prime. “We bought a ’17 Prime and love it too. My firefighter husband got crap from his buddies about the hamstermobile, but we are giggling as we pass them at the pumps filling their trucks.” Good job Marianne!

Thanks for reading my story. See you in the next story titled: Damaged 2019 Toyota Tacoma Symbolizes Hope for a Community After Tornado Direct Hit.