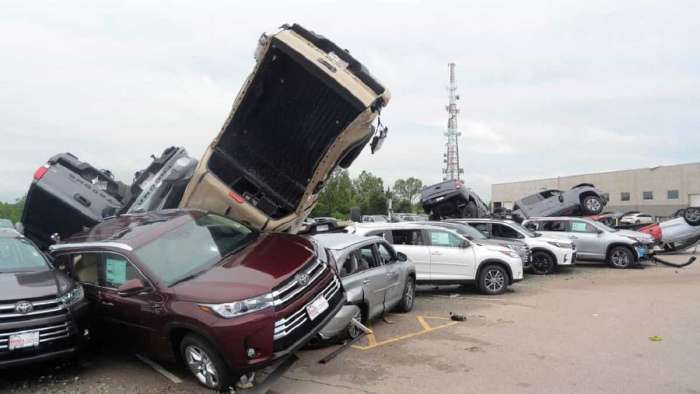 You just cannot kill a Tacoma. When a badly damaged 2019 Toyota Tacoma started and drove on its own following a “direct-hit” tornado strike, this took this popular slogan to a whole different level. How durable are Toyota Tacoma trucks.
Advertisement

“You really cannot kill a Toyota Tacoma.” This is a phrase I have heard on and off for the last 15 years since I have followed the Toyota brand. You see, the Tacoma is known for incredible resiliency and long-term reliability and dependability.

However, this theory was put to the test after a devastating storm a few weeks ago practically destroyed Riley Toyota in Jefferson City, MO and nearly all its inventory.

An EF-3 tornado ripped through the dealership, and within a matter of minutes, hundreds of Toyota cars, trucks and SUV’s had been thrown and hurled and tossed through the air.

The scene reminded me of little kids throwing their toy cars up in the air or smashing them together like a demolition derby, and the cars land wherever they land. Same thing here but in real life. With real consequences.

What a surreal feeling seeing the aftermath. A Tacoma rising straight up in the air at a 90 degree angle resting against a Highlander. Another poor Tacoma imperfectly balancing on top of a RAV4 and another truck (a Tundra? a Tacoma? It was hard to tell at this point).

Thankfully, no Riley Toyota employees or customers were on the property when the tornado hit. “We are so thankful no one was hurt and that this happened when we were closed.” Said a dealership spokesperson following the storm.

A glimmer of hope found with a 2019 Toyota Tacoma

As I observed this horrible turn of events, the one piece of news that gave me hope and made me stare in wonder was that of one specific 2019 Toyota Tacoma TRD Sport. In quicksand. A color ironically named after another freakish fear-inspiring oddity of nature. 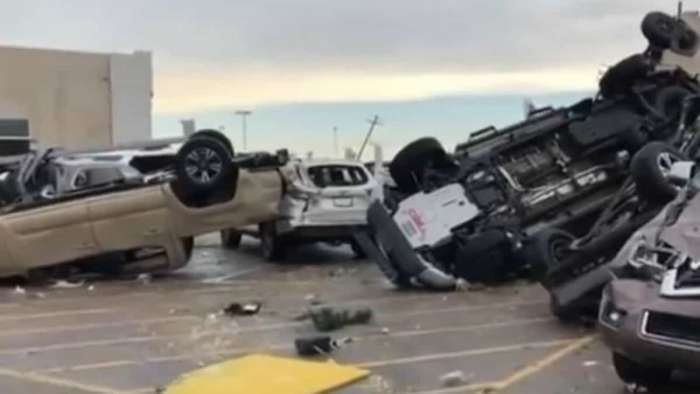 This poor Tacoma. A truck that had been sucked up into the air by 160mph winds and tossed back to the ground upside down. On its roof. Poor Toyota Tacoma.

Yet, once the clean-up had begun, and these Toyota cars, trucks and SUV’s were set upright again, an amazing yet actually predictable thing happened.

This 2019 Toyota Tacoma TRD Sport, after spending days upside down, still started and was able to be driven on to the tow truck. Albeit with a lot of smoke coming from its exhaust as you might expect. 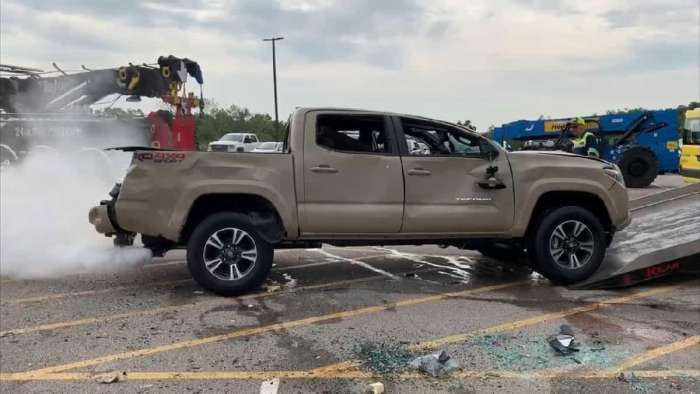 What does the internet think about this Tacoma?

Naturally when people watched the video of our new favorite adopted Tacoma driving on its own to seek out its next adventure, the internet was abuzz with comments:

"The best truck on the planet!"

“They need to park that in the showroom ! Toyota tough!”

“Runs and drives! I’ll take a flipped over Tundra please and thank you!”

“(even in its present condition) still better than a Ford or Chevy.”

Hopefully this Toyota Tacoma’s literal and inspirational battle against a tornado will serve as a beacon of light and hope as the dealership works to rebuild.

“You just cannot kill a Tacoma.” Well, you also cannot keep Riley Toyota down for long.

“This storm may have physically torn us down, but Riley Chevrolet Buick GMC Cadillac, Riley Toyota, and Riley Collision Center stand tall and will rebuild, coming out stronger and closer than ever before.” Proclaimed Kevin Riley, the dealership’s president.

It was nice to see that, in spite of the awful event that happened just a few weeks ago, Riley Toyota can see the light at the end of the tunnel. Posted on their Facebook page June 19th was a simple poll question with a much deeper meaning:

“Can you guess HOW MANY total loss vehicles our Toyota store had from the tornado?”

Thanks Riley Toyota for showing us that in spite of a tragedy you can provide hope for all your loyal customers and everyone around the world watching you as you rebuild and grow.

Everyone please write a comment and wish Riley Toyota and their employees well as they work to rebuild their proud family business. Please share this story on your social media so we can show Riley Toyota how much we all care. #rileystrong.

Thanks for reading everyone. See you next story titled: 2020 Toyota Tacoma Desert Air Intake Snorkel Breathes New Life into Off-Roading.

Watch as I review the 2019 Tacoma TRD Sport and subscribe to Torque News Youtube Channel for daily news and analysis on Toyota trucks and automotive industry in general.

J Rock wrote on June 22, 2019 - 11:51am Permalink
Seriously thought you meant it literally drove on its own!! Tacomas are kinda cool but not that cool. B-