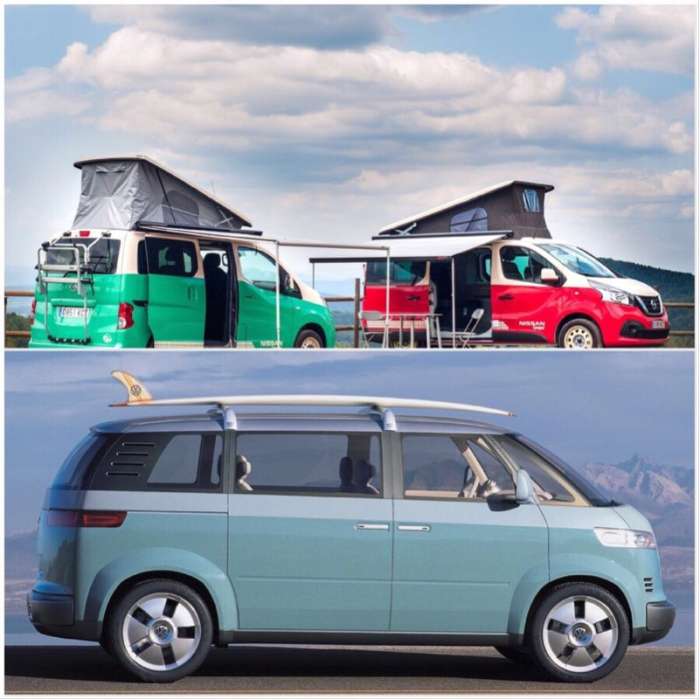 With all the fast paced changes occurring in the EV world from a Tented Model 3 to a Class 8 Mighty Tesla Semi RV Camper coached by Instagram, has unfortunately left EVers with an inescapable reality: this summer they’re left short handed with few camping vehicle options. What’s presently selling they’re not selling them here in the states. And Teslarites are taking the matter into their own hands.
Advertisement

While they start making CAD renderings of the Class 8 Tesla Semi RV coached by Instagram so we soon can have a prototype (wishful thinking) it would be nice if there was something smaller and cheaper for a weekend getaway. With electric minivans and commercial utility vehicles on the market for years now, there is no excuse why at least one US market auto manufacturer should have an affordable reasonably ranged EV BEV camper, please, if not that, at least another PHEV, ready to go off-grid into the wilderness. Between Ford Transit Connect, and Nissan’s NV series smaller vans, c’mon, there’s gotta be something out there cheap, economical, and decent ranged equipped to go camping right? Ah, actually, no, if it’s to be sold here in the states.

We still have a long way to go in the electric car world. Look at the extremes we went through watching a company trying to birth a BEV sedan this and last year? You figure it would be a little too much to ask for a nice spacious EV wagon of some kind to lay a mattress and sleeping blanket on, let alone in a camper right? The fact of the matter is we are now into the sixth, nearly the seventh year of Model S production, and the US still doesn’t have any viable option of charging up a minivan type vehicle and go camping with it. Our fallbacks are something like a way more expensive and bigger Sprinter segment. You’d figure we’d see a viable camper Model X happening, but those gull wings look like a Kodiak bear could have them for lunch so we better look elsewhere .

So Elon and company are taking their destinies into their own hands again, to not wait until someone makes or coaches an RV or camper the way an electric camper should be made, and give their fellow Teslarites options to plug into and/or attach to their Tesla, until hopefully at least next summer. So here’s what’s NOT available here in the US but elsewhere, and what options you have for camping with your Tesla.

Making their debut at the Madrid Motor Show last June, the NV Series Nissan Van seems to have all the nice touches it needs, to be a faithful competitor to maybe perhaps but don’t hold your breath until you actually see it, the VW BUZZ ID Micro Bus EV Concept (Do I have the right concept, forgive me if I don’t, you see VW has so many concepts out since they cancelled the last Samba, I can now use their prototypes to count sheep while camping). The EV has a paltryish range of about 128 miles but if that’s just not enough for you there’s the gas version until there’s improvements. And in the RV coaching world Recon’s version which costs around upwards $50,000 USD if you can’t wait for affordable.

Nissan even has two colors illustrated in the pictures of the demos that harken the 1950s and 60s Type 1’s, a two tone white and bright red or an avocado-ish green. And the interiors are so minimalistic and tastefully done without looking so expensive, they have a feel of Westfalia utilitarianism without the native Deutschland sticker shock.

Nissan does a good job of replicating Vanagon Westfalia inside, Type 1 and 2 color matching outside to wonder if that also translates to lack of power, sloppy steering, and no brakes, that harken back to the VW shoeboxes of that era? Well, I have to ask the question, that’s my job. The bigger problem is that they’re not coming to the states anytime soon to be confined to Spain of all places. Oh well.

VW Buzz ID Micro Bus: Not Holding My Breath Niether Should You

And again, no change in timeline for the new EV Microbus, but the difference was that it was supposed to have a range of about 310 miles. It made its debut at CES early 2016, VW was supposed to set it into production in Mexico in late 2017, of course almost two years later that hasn’t happened yet. Now the date is 2022. And so on, and so on, and on . . .

Remember, these are the same people who have no idea whether they’re coming or going with Beetle. At first when they killed Beetle Mark 3 last March they said there wasn’t going to be another Beetle, that we’ve been all Beetled out. They said that decades ago with Beetle 1 cancellation.

But when their production chief saw potential on that new Buzz ID platform with its spaciousness, they started thinking about doing what was discussed for decades with Beetle that was never done, the closest being in 1973 when the last version revealed, and that was with Super Beetle. The idea was to take Beetle to the next level and that was to make it a sedan, in this case with rear electric motor under the Micro Bus type shelf, some kind of rear hatch utility type sedan. So maybe Beetle is on life support with this idea that the Bus is too somehow.

Here’s another VW Bus this more recent that ain’t coming that’s all the rave, the California. California. That’s a joke right?

So here we are. We’re ready to camp with no reasonable EV camper rig for duty. Elon provides a solution for now.

For a few years now since Teslarites began to realize how comfortable the Models S and X can be for taking things like a good nap when you have a good mini mattress, a cozy blanket, and pillow. The problem was trying to find the right settings at the right time as close as possible to work together so you can stay inside the car as long as possible without anything shutting off. It’s called “Camper Mode.”

Camper Mode with the added lexicon “Party/“ that sometimes attaches, sometimes not, referring to tailgate parties where the same settings apply, is a set of car features that allow them to continue operation into auxiliary mode using battery power for up to 48 hours. Tesla owners can now sleep or do WHATEVER inside their vehicles with or without lights, music, a/c or heat, and locked inside for hours while sleeping, and while all power ports are powered up for use for using and recharging other electronic devices. A very handy feature. What’s so nice about this feature is that you never have to worry about carbon monoxide poisoning so as long as your not cooking with a fossil fuel inside the car.

So with camper mode, owners can improvise and use their cars as some kind of camping or lodging vessel until more outdoor and second camping equipped vehicle options come along. And like phone apps when IOS and Android took off, camper mode accessories are starting to take off like wild flower. Check out this tent for Tesla of a different kind on Amazon. Don’t panic. It’s not the Fremont kind you can’t fold away!