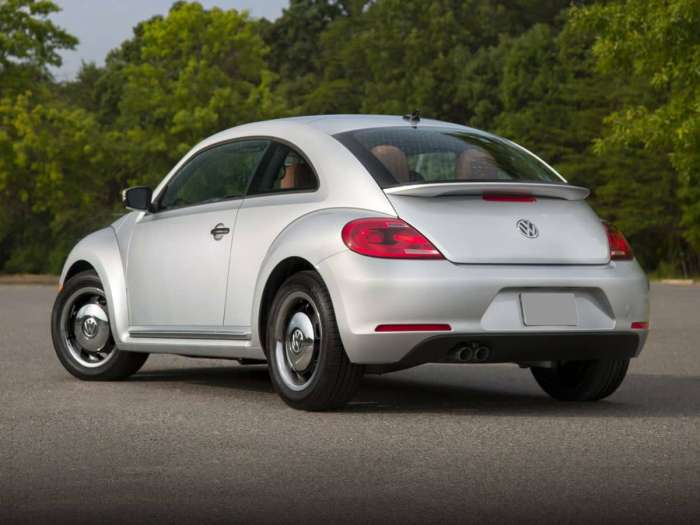 The 3rd Gen Beetle Retires, VW Bosses Look For the Next Beetle to Go Old School but in a Sedan

When the Third Generation Volkswagen “New”Beetle begins its swan song next year to leave at the end of 2019, there will be a record of successes and setbacks, happiness and sadness stemmed from the iconic halo car’s third rebirth that has defined not only another generation of people as the Classic Beetle did, but also what the next car should be, as that might possibly be their 100 year anniversary model, and what it is for a car to now be a Volkswagen. Especially for the next electric one, Beetle 4.
Advertisement

Volkswagen is considering bringing back the Beetle as an all-electric car. Imagine a new VW Beetle EV sedan.

There are great expectations of Beetle 4. It’s the equivalent of looking into the future knowing some kid is definitely going to be president or prime minister years from now. Journalists are reading Volkswagen executive statements between the lines like tea leaves to see where they might take Beetle Mark 4 into the future when it debuts 4 years from now:

It’s hard to believe it’s been about 35 years since the Classic Super Beetle said goodbye to the US market to swan song around the world until the last Super Beetle rolled off an assembly line in Mexico, for it to become officially retired and history. Now it’s time for her little sister, Beetle 3 to do the same, as she waits for her next baby sister Beetle 4 to debut sometime in 2022. They’ll be three years apart for the transition. It’s still a long way off especially in Car Land.

At issue is what to do with Beetle 4 as Beetles 2 and 3 were popular but didn’t capture the sales success and experience of Beetle 1. What we do know is that VW wants to entirely redo its iconic signature halo car and bring it back to its roots in styling with only the modern touch of electrification. I get the impression VW wants to make the next car look more like the original one, not only in architecture with RWD and rear electric motor, but also with more stylling cues from pre-Super Beetle than Beetles 2 and 3. VW design chief Klaus Bischoff told Autocar that they are considering an all-electric Beetle on the MEB platform, though they would have to make a 4-door, says Bischoff: “If you look at MEB, the shortest wheelbase [possible] is the ID [hatchback]. If you took that and did the Beetle on it, you have plenty of room so there’s no compromise in functionality any more. So it could be a very attractive car.”

Now, in some 80-90 year history of the People’s Car, there was always talk of making a four-door variant but it never got off the ground, and frankly, I think VW was always risk-averse to sedans through the 80s. When they started to develop Audi, that’s when they got over themselves. But when VW was developing what would eventually be the last version of the Classic Beetle, and that was the Super Beetle, they were thinking of a 4 door variant, and developed a full-scale model prototype that kind of looked like a 911 4-door. We almost forget who had a hand in making the original car. He was no longer with us by 1951, but I believe by the 70s there was a grumbling somewhere for a 4 door version. It never flew. Ferdinand was that you?

Volkswagen just needs to be careful whatever they decide to do. If they do Beetle 4 right, it may sail into the 21st the way Beetle 1 did through the 20th. And I think that’s at least close to what VW wants to do: see how long and far they can stretch out that MEB platform. If Beetles 1 to 3 lasted as long as they did, good chance Beetle 4 or a variation will live on to be their 100th anniversary Beetle Model. Although you can pin production year to 1938, the Beetle was born way before then. So unless VW does something different for the 100 year Beetle, whenever 100 years is, if Beetle 4 becomes as popular as Beetle 1 was, they may not need to do anything at all or little. Have a good rest, the People’s Car. See you soon!