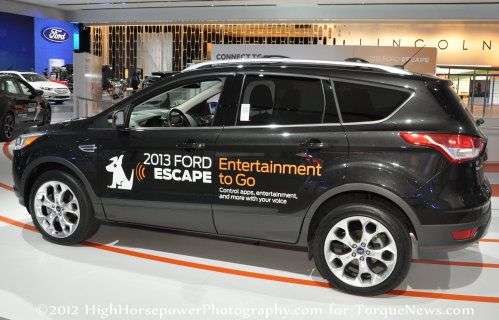 Ford's popular online media interactive reality show, Escape Routes, in which teams of competitors driving the new Ford Escapes attempt to solve navigation and real world problems with the aid of their followers on social media, is moving to Prime Time TV.
Advertisement

Ford is teaming up with NBC, Telemundo’s mun2 network and eight-time Emmy Award-winning producer Elise Doganieri, along with David Leener from the Profiles Television team, to make Escape Routes into a prime-time reality TV show, airing on Saturday nights on NBC and mun2 beginning March 31.

"At NBC, we continue to look for breakthrough ways to work with our partners and the Escape Routes program was a unique opportunity that we hadn't seen before," said James Hoffman, executive vice president, Sales and Marketing, NBC. "We're excited about the show and think the concept of Escape Routes and its unique use of social media will add a compelling element to Saturday nights."

The new show will air for six successive episodes, hosted by reality show personality Rossi Morreale, host of a variety of network and cable TV programs. Escape Routes will be broadcast Saturday evenings at 8 pm/ET on NBC and air on mun2 Saturday nights at 11 pm/ET. This is the first time Ford will combine a series using both general market and bilingual cable distribution in tandem. Each episode will also air on nbc.com and mun2.tv the day after the broadcast.

"We are excited to be partnering with Ford on this groundbreaking series," said Doganieri. "There are two key elements to this series: first, the interactive element, which is designed to engage viewers throughout the show and encourage them to participate in the challenges; and second, the real-time twist where consumers have the ability to follow their favorite team in the digital space. We've enjoyed collaborating with Ford on this project and feel the end result has the potential to be a real game-changer in the reality world."

Ford is showing a high level of understanding of new media, which first revealed its potential when Scion’s Dare to Be Square videos went viral, helping to establish the brand within its young demographic. Social media has matured to some degree as have the average participants in such programming.

"Ford has been in the original content space for a while, and we continuously look for opportunities to work with creative partners in a collaborative way," said Farley. "For us, this is a natural progression from integrating product into existing programs to creating our own."

During each Escape Routes episode, six teams of competitors will arrive in a new city to compete in a series of spontaneous adventures and interactive challenges in their new Ford Escapes, features of which the challenges will surely highlight, while the advantage provided by social media followers is likely to be intimate knowledge a the city relatively unknown to the teams.

The first city visited will be Los Angeles, followed by New York, Atlanta, Miami, San Francisco and Las Vegas, engaging followers and examining the local cultural fabric in the process. Fans will be able to play along with the six teams during their adventures at escaperoutes.com.

It would seem likely you will need to sign up to follow and support one particular team, so they know you are not misinforming them as a provocateur loyal to their competition – or will they?

"Escape Routes is designed to give our audience an unprecedented level of engagement," said Doganieri. "Not only will viewers be able to follow along in real time, but followers will have the ability to impact the outcome of the game."

Internet personality, iJustine, will be embedded with the teams on Escape Routes and capture exclusive behind-the-scenes content to be distributed through her social site as well as other earned and owned platforms. The bodacious 28-year-old (in 3 weeks) blonde is a lifecaster par excellence, with over 25 million video hits – 16 million on YouTube alone.

The teams are Bre and Tara, best friends and soul mates from Boulder, CO; Derek and Drew, fraternal musicians from Seattle; Iris and Terrence, best friends from L.A.; Brett and Ross, YouTubers from L.A.; Sharon and Wilson, siblings from Florida; and the victorious online competitors for the final slot, Tiffany and Chekesha, two models from the Big Apple complete the roster.

Ford has sold nearly 2 million Escapes since the model was introduced a decade ago – it is the best-selling small SUV in the U.S.

So you don’t have to be an outlaw to plan an Escape Route, but it does help to be a cheeky model from NY.