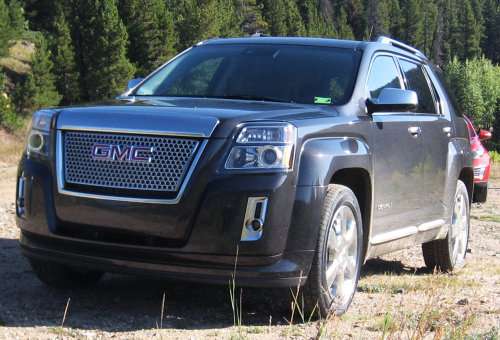 Both models are distinguished by new safety features, technology, infotainment capabilities and unprecedented fuel economy with a choice of two engines.

In the 2013 GMC Terrain Denali the biggest improvements come in the form of advanced sensor technology comprised of Side Blind Zone Alert, which displays an alert on the appropriate mirror if a vehicle is in close proximity; Rear Cross Traffic Alert, capable of detecting traffic approaching from either direction behind you as you back out into the street; Forward Collision Alert to alert drivers when they are approaching a vehicle to rapidly (a distance which can be set to preference or ambient traffic conditions; Lane Departure Warning to keep you from wandering off track if drowsy and a rearview camera to reveal what’s behind you beneath your line of sight when backing up – enhanced by proximity sensors allowing Rear Parking Assistance.

We asked what the opportunity the RMAP 4XFall presented to take the 2013 GMC Terrain Denali offroad meant to the brand?

That said it was a sheer pleasure to drive through the Rocky Mountains, providing a chance to explore some of the vehicles talents. One of these involved the Navigation Info screen, which revealed our altitude as we drove up to Caribou from Boulder. It expressed our height over sea level in yards, but presumably this is something determined is a setup screen.

It also registered how many satellites were available for GPS triangulation - if there are more than three the positioning is getting pretty darn precise. In the Rocky Mountains outside of Nederland, we were continually receiving information from four to six orbital viewpoints, implying the system is most accurate where it's needed the most - off the beaten track!

Torque News friend and colleague Aaron Turpen observed that, “180 hp is not underpowered, just no fun.”

Certain folks would define saving money as they do something that has to be done anyway as great fun. The others would simply buy high-powered trucks or sports cars. It's all a matter of perspective.

The 2013 GMC Denali is for people concerned with comfort, safety, versatility and capacity – not fun, per se. It rather provides them with a sense of security and peace of mind, especially when their teenage son or daughter is driving.

Meanwhile, the 2013 GMC Acadia Denali is meant for people who need seating for up to seven, while still valuing the same comfort, safety, versatility, capacity and optimal accessibility to third row seating. The Acadia has two captain’s chairs in the second row separated by an aisle, making third row access as easy as it gets.

Both vehicles share rugged, yet refined, muscular good looks. The Terrain has a sharp and open honeycomb grill, while the Acadia’s is similar, but broken into three tiers – in each the GMC badge is proudly mounted front and center to herald the mighty vehicles arrival.

Half of the aforementioned sensor technology will make it into the Acadia Denali in the 2014 model year, but now it is equipped with the Blind Zone Alert and Rear Cross Traffic alert – probably the most important to day-to-day safety.

The outstanding features of the 2013 Acadia Denali include an unusually low step-in height along with the commanding view of the road, one of the main reasons many people like crossovers and SUVs.

The Acadia can seat up to eight, even though the second and third row seats can be folded flat providing a segment leading 116.9 cubic feet of interior cargo space. The cargo area is 48 inches wide, allowing goods like plywood or drywall sheets to be loaded.

The difference in seating seven or eight is an optional second row bench seat, with Smart Slide providing access to the third row. It is a 60/40 split seat that folds flat.

The model available at 4XFall had the seven-seat configuration, so to confirm the eight-seat option we used the brand’s live chat feature online to quickly get an answer. Interested consumers can use this feature on the GMC model pages to get answers to any questions we have failed to explain here adequately.

Both vehicles have 6-speed automatic transmissions, heads-up mpg display, and a host of telematics features including voice recognition of phone and audio commands, Pandora and Stitcher SmartRadio apps, Sirius XM with Weather and Traffic updates and a three-month subscription plus USB flash drive and digital device connectivity.

Both the 2013 GMC Terrain Denali and Acadia Denali come with a high-definition seven-inch color touchscreen with IntelliLink to display incisive routing from your address book, points of interest, stored destinations or a freshly input address. With time to kill, one can also peruse photos from a USB flash drive on the screen.

Both vehicles were more than adequate to the low and intermediate impact offroad routes we challenged them with. These four-wheel- drive unpaved roads contained rock protruding from six to nine inches, mild inclines and declines, plus the occasional puddle to splash in. These tracks lacked any significant tilts, overhangs or minor rock climbing found in the third and most difficult route.

As Aaron kindly reminded me, the 2013 GMC Terrain Denali and Acadia Denali are not full time all-wheel-drive vehicles. They are front wheel drive until they detect the need for added traction, which kicks in the added wheel torque. This is how they are made more fuel-efficient than vehicles this size have traditionally been.

Notably the 2012 GMC Acadia Denali and Terrain Denali both received a 5-star safety rating from NHTSA and Best Buy designation by Consumer Digest. The Acadia also won the 2012 Residual Value Award from ALG and Edmunds.com for a Full Size Utility.

In the final analysis, it is good to see vehicles of this size becoming more frugal in their thirst for petrol. It is also nice to see the technological and safety progress GMC is making. It you need a large crossover for passengers or cargo and desire comfort and reliability, the 2013 GMC Terrain Denali and Acadia Denali deserve your consideration.

Hats off to RMAP for this unique and premiere event, which was not only pleasurable, but also informative and educational.