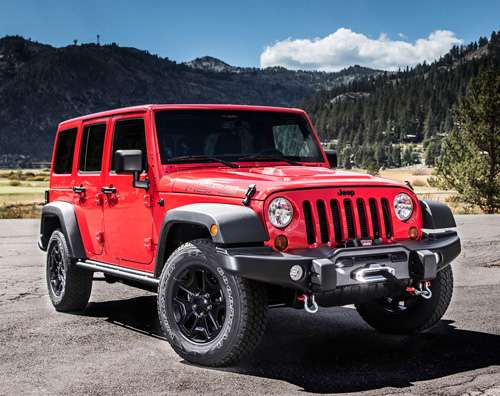 Jeep three-peats as Four Wheeler of the Year

The new 2013 Jeep Wrangler Unlimited Moab Edition has won the enviable Four Wheeler of the Year award from Four Wheeler magazine following in the tracks of the Jeep Wrangler Rubicon and Jeep Grand Cherokee that won the last two years.
Advertisement

These are the very features of the Wrangler – named for one of the most visited offroad destinations around – that captivated the editors of Four Wheeler magazine.

"The Jeep Wrangler Unlimited Moab is an extremely versatile vehicle, and was a hands-down trail favorite of the Four Wheeler judges," said John Cappa, Four Wheeler editor. "The improved interior comfort, amenities, power and overall performance both on and offroad make it worthy of being our 2013 Four Wheeler of the Year."

To warrant consideration for the award vehicles needed to be entirely new or feature substantial mechanical updates from the last model year.

The vehicles were put through their offroad paces on a variety of terrain, spanning pavement, gravel, dirt, sand, rocks and mud covering more than a thousand miles.

This award comes less than three years after the Jeep Wrangler Rubicon from 2000 to 2009 was labeled the Best 4x4 of the Decade by the magazine.

Apparently the notice the 2013 Jeep Wrangler Unlimited Moab Edition is getting from the media continues on to the marketplace, as sales for the model are up over 17 percent for 2012.

Who wouldn’t be delighted with one under the Christmas tree this Dec. 25th?

Make that the lighted tree in the front yard, okay?