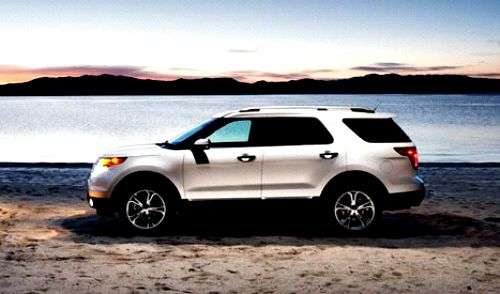 The 2012 Ford Explorer is an ambassador or sorts to the GITEX Technology event held in the Middle East where their telematics and other cutting-edge features are driving a 57 percent sales increase over last year in the Gulf Cooperation Council (GCC) countries of Bahrain, Kuwait, Oman, Qatar, Saudi Arabia, and the United Arab Emirates.
Advertisement

GITEX or the Gulf Information Technology Exhibition is one of the premiere consumer computer and electronics trade shows in the world, which takes place in Dubai, United Arab Emirates this week from October 9 to 13.

“The Ford and Lincoln brands are going from strength to strength, as sales during the first half of 2011 posted nearly 50% growth in the GCC region over the same period last year,” Larry Prein, Managing Director, Ford Middle East told an unnamed reporter for ITP.net. “The company continues to see market share growth around the region thanks to the success of its new generation of models. “These factors put us in the lead, as we continue to make high-end technologies available and affordable mainstream. The show allows us to reiterate Ford’s continued drive towards launching more innovations and setting the benchmark in driver-focused technologies that make the ownership and driving experience seamless, safe and fun. More and more customers are choosing Ford thanks to its strong new products, and this is helping us grow stronger and gain market share across the region,” Prien said.

Ford has been an official automotive sponsor of GITEX for four consecutive years, and this is highlighting the 2012 Ford Explorer. The SUV with a 20 year history arrives with new technologies including the 4WD Terrain Management System, Active Park Assist, inflatable rear-seat belts and Curve Control.

“Over the past few years, Ford has continuously set the industry benchmark, bringing high-end technologies to the mainstream market and raising the ownership experience to new levels,” said Prein according to a report in the Khaleej Times Online by Abdul Basit.

“Ford continues to grow in the GCC and this year the results have been outstanding,” said Hussein Murad, Ford Middle East’s director of sales. “Clearly, our customers realize the levels of quality, technology and value our new products offer and they are choosing Ford.”

“Ford set the tone on driver-assist technologies with the new Taurus two years ago, then the new Edge took driver connectivity to different dimensions last year, and now with the all-new Explorer, Ford takes customer expectations of a 4WD vehicle to different levels altogether. We are confident the new Explorer will capture the hearts and minds of GCC customers from day-one,” Murad continued.

“Clearly Ford’s smart cars, crossovers and trucks continue winning over consumers in the marketplace,” Prein concluded. “Customers value the new technologies we’re bringing them. And this trend promises to continue well over the fourth quarter and beyond as our lineup gets richer with the introduction of innovative and dynamic products such as the all-new Ford Explorer which I trust customers will agree, sets the benchmark yet again for its category exactly as it did 20 years ago.”