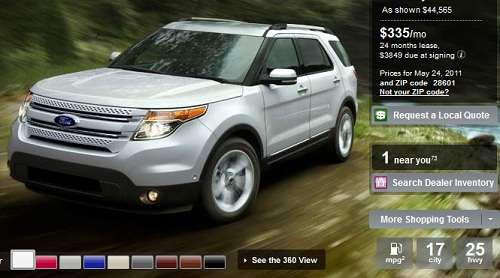 Normally when one looks at the reported MPG of a new car the expectation is that the numbers reflect the best driving scenario, but the 2011 Ford Explorer MPG seems to deliver more than announced by EPA.
Advertisement

TorqueNews has been driving the new Explorer for almost a week and getting an above average MPG compared to what is reported by the company and EPA. As seen on the image accompanying this story, Ford reports 17 MPG for the 2011 Explorer in a city driving. EPA fuel economy estimate is the same for a city driving.

We drove this SUV for several hundred miles and got better mileage. The 2011 Ford Explorer MPG for us varied between between 17.2 to 18 miles per gallon. We did not track it in a highway driving, giving a primary importance to a city driving. However, this article will be updated in the next 24 hours with HWY MPG data on this SUV from TorqueNews.

In the meantime here is a look of what other reviews report on 2011 Ford Explorer MPG.

While the 2011 Ford Explorer MPG is a significant improvement of more than 25 percent from its 2010 version (city 13, highway 19 according to Greencar) the company realizes the need to provide better mileage per gallon if it wants to make the new Explorer "jaw-dropping." Thus, Ford sales analyst George Pipas teld the CarConnections that the carmaker believes in the market for people who love adventures. "But we've got to make this thing fuel-efficient because if it's only 19 [mpg], then that's not the direction we're headed. It has to be something jaw-dropping," Pipas said on January 2010.

Indeed, Ford made the improvement. The 2011 Explorer went from 19 MPG on highway to 23-25 MPG. The 23 is according to the to US Environmental Protection Agency. The 25 is what the company reports.

"The increase from 2010 to 2011 is extensive but its a whole new vehicle," says Patrick Rall, the managing editor of Torque News. Rall adds that it may not be realistic to expect this every year. The company may be fortunate to get a 1 MPG gain from year to year, with the exception of massive overhauls, "and those don't happen often."

The MPG improvement is an important development in light of the current gas prices. EPA has estimated the annual fuel cost of the 2011 Ford Explorer to be 2,367 dollars if one drives 15,000 miles at a gas price of 3 dollars per gallon. Therefore, the current MPG improvement is a significant help for individuals and families who like to the new Explorer for adventure and family fan.

Armen Hareyan wrote on May 24, 2011 - 4:21pm Permalink
Updated: May 24, 4:20 PM Chris Hills reports the 2011 Ford Explorer MPG improving over time as the engine breaks in. Here is what <a href="http://www.facebook.com/FordExplorer/posts/175615012496555?notif_t=like">Chris writes</a> on Facebook. "Chris Hill My current avg in my limited AWD is 18.5 MPG with about 1500 miles on it. This is a combo of city and highway, with a ratio of probably 65/35. Plus, it seems to only get better with time as the engine breaks in. First big road trip in early June. Can't wait to see the purely highway MPGs I'll get."
Branden wrote on May 24, 2011 - 10:01pm Permalink
I work at a Ford dealership as a sales consultant and the new Explorer is a great CUV/SUV. Even though it's gotten negative reviews, in my opinion it's best in class overall.
Car guy wrote on October 10, 2011 - 7:39am Permalink
I thought the Explorer 2011 got very nice reviews. Wherever I read it was positive, except few minor things. Overall it's a great car as I have driven it. Why do you think the reviews were not good?