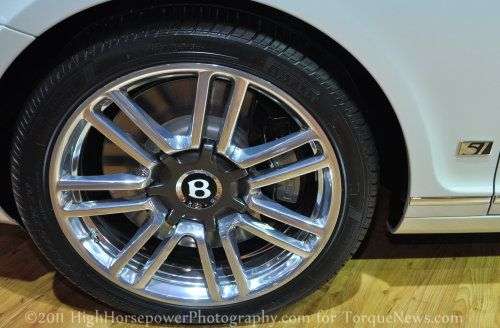 When the long awaited Bentley SUV comes to market in 2015, it will feature a W12 engine similar to that released in the Supersport Cabriolet this year. An engine which will, in the luxury convertible, catapult you from zero to 60 in 3.9 seconds – in a car weighing 2.5 tons.
Advertisement

“We will be first to use a 12-cylinder petrol engine in a luxury SUV. I like this idea; it makes clear whose car is the boss,” said Wolfgang Dürheimer, Bentley CEO, to Autocar in an unattributed post on their site today.

When started, the similar engine in the Supersport will growl softly like a tufted bobcat in an amorous mood and then raise its hackles in angry warning as you press on the accelerator – it is the wondrous symphony of a highly-tuned, wildly powerful combustion engine.

The W12 is actually more compact compared with a V12, although the Bentley SUV’s engine bay will likely be large enough to accept either one, as the brand is also planning a V12 TDI version a few years down the road.

Bentley has recruited a new chief engineer from Porsche, Rolf Frech, to replace Ulrich Eichhorn. He brings considerable SUV experience to bear from his work on Porsche’s Cayenne model.

“The production date will be dictated by the cyclicity of models,” Dürheimer said. “The Mulsanne came in 2010, then the Continental no more than a year later. The lifespan of a model is usually six to eight years, so the new model will be valuable when we are expecting a lull. The downswing is the time to introduce this SUV. Ninety-nine per cent of Bentley owners also own an SUV – I am absolutely sure the demand is there. Absolutely thousands of premium SUVs have been sold — Cayennes, Range Rovers, Q7s and so on — but nobody has given those owners the chance to upgrade. We will.”

LG's New EV Battery Plant Is a Welcome News for Tesla
Tesla Giga Berlin's New Hurdle: It's Not Only the Gov't, but Now Tesla Itself
END_OF_DOCUMENT_TOKEN_TO_BE_REPLACED