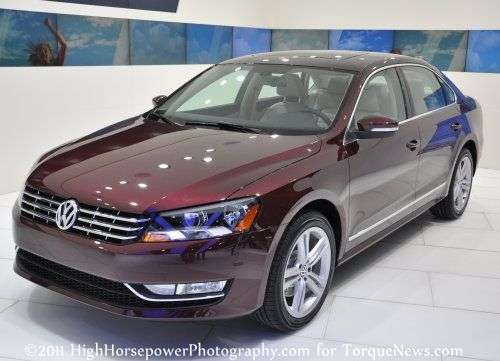 The world's sixth largest third party auto supplier, Faurecia will provide significant parts contributions to the production of the 2012 VW Passat in the Chattanooga, TN plant. These will include exhaust systems, seating and dash elements, as well as lightweight front-end carriers for fan, bumper, headlights etc.
Advertisement

2012 VW Passat to feature significant Faurecia input
The world's sixth largest third party auto supplier, Faurecia will provide significant parts contributions to the production of the 2012 VW Passat in the Chattanooga, TN plant. These will include exhaust systems, seating and dash elements, as well as lightweight front-end carriers for fan, bumper, headlights etc.

Increasingly cars are built in the global village. What is thought to be American may have been built in China, Mexico or Brazil. What is perceived to be foreign may have just as easily been built in Kentucky, Tennessee, Michigan or Indiana.

To a large extent, parts are produced all over the world and assembled at a single plant. More and more parts are made by third-party suppliers as manufacturers focus more on the overall design and efficient production of vehicles.

Faurecia North America is one of these suppliers who had sales totaling $3.4 billion in 2010. They have 29 production sites in the United States, Canada and Mexico, employing over 9,000 people. There are four technical and development centers, situated in Auburn Hills, Holland and Troy, Mich., and in Columbus, Ind., as well as a customer center in Toledo, Ohio.

The all-new 2012 Passat will utilize Faurecia parts inside, outside and underneath the vehicle, according to Faurecia North America president Mike Heneka.

Volkswagen of America, Inc., recently announced the debut of this new midsize design, the largest Passat ever, which will appear in showrooms later this year.

"Faurecia is pleased to be playing a key role in the development and production of the new Passat, with major systems furnished by every one of our business groups, including Faurecia Automotive Seating, Emissions Control Technologies, Interior Systems and Automotive Exteriors," Heneka said.

The company’s new facility in Volkswagen's Chattanooga supplier park will provide the exhaust systems for the Passat. Faurecia designed and developed unique emissions control packages for three of the engines available in the 2012 Passat – a 2.5L gasoline engine, an eco-friendly 2.0L TDI clean diesel and a powerful 3.6L VR6.

Their Automotive Exteriors group will provide a lightweight front-end support structure for the grille, headlamps, bumper, fan and other components.

Volkswagen is pinning high hopes on the new Passat to transform the company's sales in the U.S. market, and Faurecia has dedicated production in 10 plants, including five in the U.S., to supply a full range of components for the vehicle.