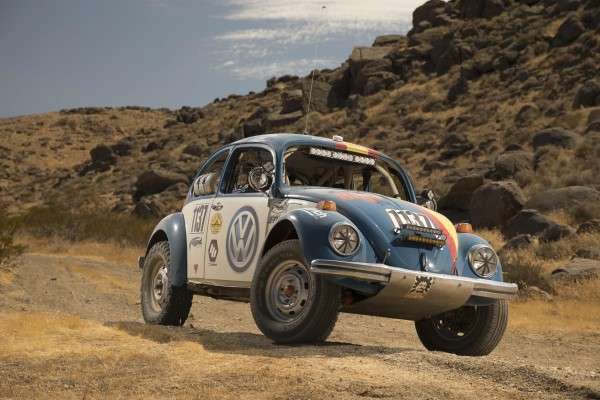 Volkswagen has been associated with the Baja 1000 since the first race half-a-century ago. The thing of it is that most of the VW-based vehicles were campaigned by independents. There was little or no factory involvement. That has changed with this year's class as VW has partnered with a Denver-based team as it plans to make it all the way from start to finish.
Advertisement

Although Volkswagens have been involved in the Baja 1000 since the first all-out race across the desert kicked off half-a-century ago, VW is directly supporting in this year’s cross-desert spectacle. VW has announced it will sponsor the ProjectBaja Class 11 Volkswagen Beetle.

Kicking off Nov. 14, Projectbaja has made it an ongoing commitment to finish the grueling event. The team is made up of Denver-based enthusiasts/racers whose leader Josh McGuckin told an interviewer that the “Class 11 Beetle harks back to the origins of desert racing.” McGuckin continued that he and his team “like a challenge and racing a Class 11 in the SCORE Baja 1000 is the ultimate.” The 2017 SCORE Baja 1000 is a point-to-point race. It kicks off in Ensenada, Baja California, Mexico with contestants running 1,134 miles to La Paz, Baja California Sur.

The ProjectBaja team started “in the same way as many Class 11 teams: we were inspired by seeing the little underdog Beetle bouncing through the desert while the big Trophy Trucks made it look easy,” McGuckin said.

The Denver-based team of enthusiasts/racers, led by McGuckin, an industrial designer, last tried to run the Baja in 2014. The crew DNF’d (did not finish). However, they took away some valuable lessons they hope they have applied to this year’s effort. McGuckin, in the interview, continued that the team is “hoping to use everything we learned … to help us get there [the finish line] this year.” Here's the spot for more Baja 1000 info.

In an exciting departure, the driving crew will include a top writer for CNET’s Roadshow, Emme Hall. Hall will be reporting first-hand from the co-driver's seat. Others in the same see include Matt Wilson, Matt Fisher, Evan Chure and Nick Wilson.

The ProjectBaja team has restored a 1970 Beetle for this year’s event. Christened “Tope,” the untested challenger has been fully restored and modified for desert racing. The powerplant is a stock horizontally-opposed 1.6-liter air-cooled engine, driving a Type 1 transaxle with limited, class-defined mods for the rigors of desert driving.

“Tope” was heavily modified for the Baja 1000 run. The Beetle received a heavy-duty rear torsion bar adjuster; the dampers were replaced with external reservoir units; stiffer springs were fitted, and the team removed and replaced the stock gas tank with a 22-gallon safety cell. The rubber was swapped out all around as the 165R-15s were changed to 235/75R-15s BFG All Terrains. Also, the rear trailing arms were reinforced, and skid plates were added for protection front and rear.

All of the glass and upholstery were removed while communications and navigation equipment was added. The stock seats were replaced by racing seats with full harnesses. And, to keep the occupants safer, the developers added a roll-cage.

The Beetle also sprouted auxiliary lighting because the Baja 1000 doesn’t stop for the night and where it runs there are no lights of any sort. It’s just black in the desert when the sun goes down, unless there’s a full moon, of course.

VW part of this race for decades

“For decades, Volkswagen Beetle vehicles, Beetle-based races, and Dune Buggies have been competing in this epic event,” said Pietro Zollino, chief spokesman for the North American Region of Volkswagen.

“We felt it appropriate to sponsor this team of eager enthusiasts who are following in the wheeltracks of Volkswagen desert racers over the past 50 years. We’re looking forward to tracking ProjectBaja.com’s progress over the course of the event and wish them luck!”, he concluded.