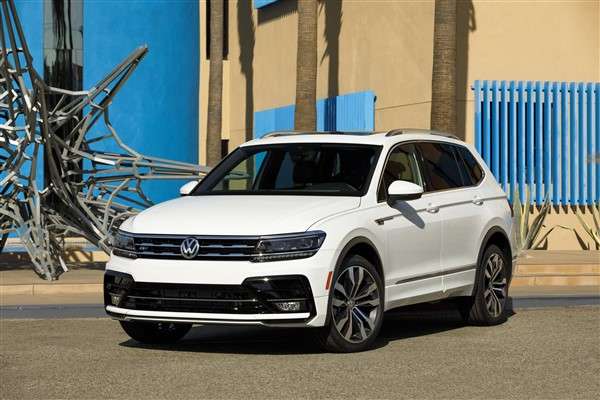 Available in the first quarter of next year, the Tiguan R-Line option was announced this week by Volkswagen. Among the features of the new package are 19-inch and 20-inch wheel and tire packages which give the midsized CUV more grip.
Advertisement

Since its introduction last summer, Volkswagen’s Tiguan – the longer, redesigned version – has been generating lots of favorable press. Automotive critics and evaluators have gone over the midsized crossover intensively and other than laments that it could use more power – agreed – the critics have universally given the 210-inch crossover, high marks for everything else.

The interior, while it is on the conservative side, is neat and well-crafted. The seats are ergonomically designed and offer the driver and front-seat passenger more than enough back, hip and thigh support. The seats feature more than thigh and lower-back bolstering for comfort. Altogether, the ergonomics of the cockpit and front passenger seat are excellent.

The Tiguan’s ride and handling are also excellent, though the 2.0-liter TSI turbo four seems a tad underpowered.

With that said, though, VW has announced improvements to the Tiguan, though, there’s nothing in the performance department. Like many automaker’s VW has given the Tiguan elements of the show, but no go as it has decided to offer an R-Line package for the Tiguan. The automaker says the new trim package enhances the SUV’s “sportiness with interior and exterior design elements that give it an even more dynamic appearance.” VW plans to introduce the R-Line at the 2017 Los Angeles Auto Show shortly.

Available on the SEL and SEL Premium versions of Tiguan, the list of equipment is robust. For example, the sporty exterior details include 19-inch aluminum-alloy wheels – SEL trims – and 20-inch alloys on the SEL trim. The exterior of the R-Line features unique badging; distinctive front and rear bumpers that also incorporate stylish air intakes at the front and a diffuser in black at the rear. The R-Line also offers body color wheel-arch extensions and side skirts.

The R-Line package is expected to go on sale in the first quarter of 2018.