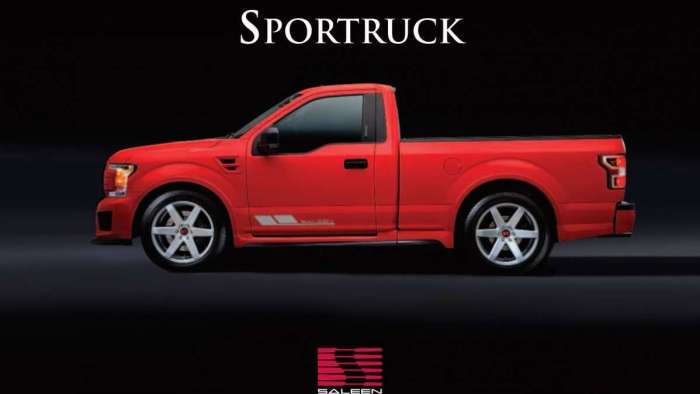 Is Saleen Sportruck Today's Ford F150 SVT Lightning? It Could Be!

Saleen Automotive has detailed its recently released Sportruck. It is a vehicle you come away from thinking, "could this be the new Ford F150 SVT Lightning?"
Advertisement

For the many Ford truck performance enthusiasts who wanted a Ford F150 SVT Lightning when they appeared, there’s now hope. The specialized performance vehicle turned many heads in 1993 when it first appeared, still has folks talking fondly today. The same people were upset when the production of the Lightning shut down in 1995. However, they were heartened again three years later when the Lightning reappeared in 1999 – it remained in the lineup for more than a decade. For those who couldn’t purchase a Lightning, there’s hope. Saleen Automotive has massaged a 2019 Ford F150 into the Saleen Sportruck, which has all the hallmarks of the iconic Ford pickup of the 1990s and early 2000s. The Sportruck is nearly the spitting image of the SVT Lightning, especially in red.

If you are wondering what all the fuss is about regarding the Saleen-Ford product, the answer is simple. The SVT Lightning was just that good. Let’s hop into the “Way Back Machine” for a trip to the 1990s. The year is 1993; the reason we’re visiting is to view the work done by Ford’s Special Vehicle Team (SVT). The SVT was a group of gearheads given the go-ahead to work their magic on Ford cars and trucks of the era. The Taurus SHO, a top-performer of that time, was one result. While the Ford F150 SVT Lightning, based on the country’s most popular pickup, was another. The Ford F150 SVT Lightning remained in the lineup for about 11 years. Ford brought out its follow-on performance pickup in 2014, the Ford F150 Tremor. The Tremor was an excellent vehicle that neither received the same level of popularity as the Lightning nor did it inspire the same type of loyalty.

For Ford, the F150 SVT Lightning was a double-edged sword. The automaker wanted to keep the numbers low, so the pickups’ value remained high. At the same time, Ford had the urge to build more of them to gain financially, but the numbers were held down. So, until the Sportruck appeared from Saleen recently, all performance people could do was hope a Lightning appeared at auction that they could afford. It is a crucial vehicle for many truck enthusiasts. Why is this so? Steve Saleen, head of Saleen Automotive, put it this way:

“The time is right that we return to the market with a product that feeds an audience of hungry… truck enthusiasts.”

'Time To Return To The Market'

Let’s look a bit more closely at the Saleen Sportruck to see what makes it tick. For starters, there is Saleen’s exclusive air management system. The system features a functional air dam, front brake ducting for max cooling and braking performance, a racing-inspired grille, and hood with center sculpting. At the rear, you find Saleen nameplate trim in the center of the tailgate and large exhaust tips that tuck neatly into the lower rear valance for a race-inspired look. 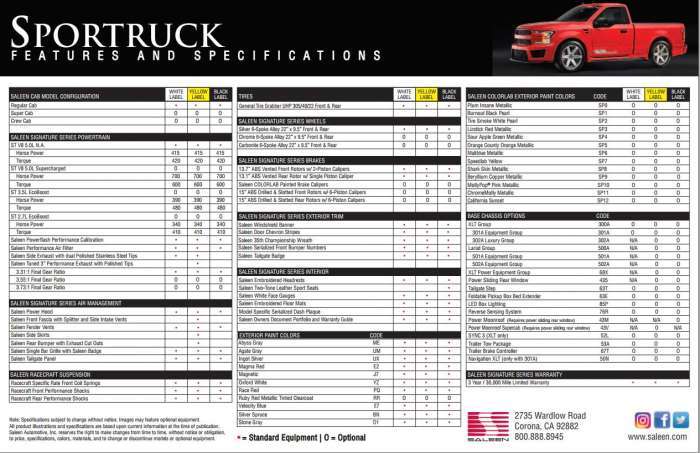 The truck comes standard with the Saleen Racecraft suspension. And, there’s an optional supercharger that takes the output of Ford’s 5.0-liter V-8 and boosts it to a pavement-ripping 700 horsepower. As to aerodynamic devices, you have your choice of side skirts or a full body step kit. Then there are the Saleen-exclusive alloy wheels shod with General Tire high-performance tires. All Sportrucks feature a Saleen serialized front bumper number, in addition to the Saleen VIN stampings.

For buyers who want a bit less excitement but who still want some performance, the Saleen Sportruck is available with Ford’s range of engine choices. The engines include:

Part of the engine-tuning that the Saleen Sportruck undergoes is an engine computer reflash so that the ignition and related systems can handle the massive output of the supercharged V-8. A 10-speed automatic tranny, with drive modes, handles the 700-horsepower engine output. And to help keep things cool under the hood, there is an oil cooler. Then, there’s the Saleen Tuned Exhaust with high-performance mufflers that acts to handle the exhaust output of the Saleen Sportruck.

Excited To Return To Market

There is lots of excitement about the Sportruck. Saleen said that they are “excited to have returned to our heritage with [the] high-performance Saleen Sportruck. The Sportruck fits perfectly within our program of high-performance vehicles carrying the Saleen Brand. Our Sport Truck heritage includes many [racing] wins as well as a national championship.”