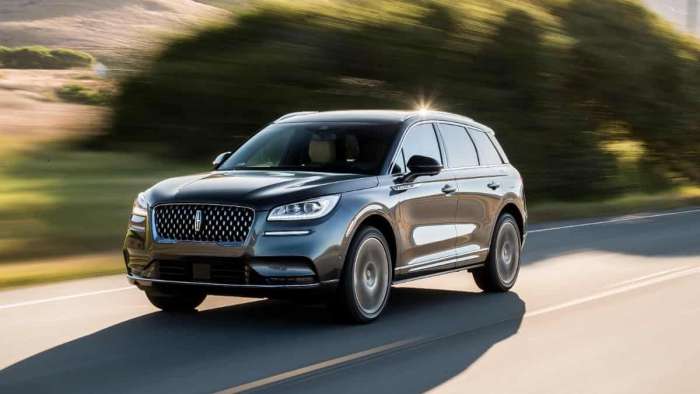 For the second time in three weeks, a Ford Motor Co. vehicle, the Lincoln Corsair, has been named the winner of a Top Safety Pick award.
Advertisement

For the second time in the last three weeks, the Ford Motor Co. has earned a key safety award from the Insurance Institute for Highway Safety (IIHS). The 2020 Lincoln Corsair and its corporate twin, the Ford Escape, received the safety organization’s coveted Top Safety Pick designation following the results of extensive testing by the highway safety group. Three weeks ago, the Ford Edge was named the first Ford winner of 2020 of a Top Safety Pick honor by the IIHS.

The way the Bending Lighting tech works is this: Working with the Corsair’s front camera, the lighting looks at the road ahead, if it senses a corner, the system decides where the light is needed, and it then adjusts the headlights to put lighting where it is required immediately on the curve or bend. The Speed-Dependent Lighting works like this: At high speeds, the light is directed to the road ahead, while at lower speeds, the headlight adjusts to illuminate areas around the car.

Corsair, a small luxury SUV, and its corporate twin, the Ford Escape, earned superior ratings for its standard and optional front prevention systems and gained acceptable scores for its curve-adaptive LED project headlights. The Corsair earned superior ratings for both its standard and optional vehicle-to-vehicle front crash prevention systems and received an acceptable rating for its available curve-adaptive LED projector headlights.

To qualify for a Top Safety Pick award, a vehicle has to earn good ratings in:

Also, vehicles will qualify for the award if they receive good or acceptable ratings in the passenger-side small overlap front test. And, the car must have an advanced or superior rating for vehicle-to-vehicle front crash prevention and a good or acceptable headlight rating.

A Bit More About The Lincoln Corsair

The Corsair rounds out the brand’s portfolio of luxury SUVs. It combines refined power with excellent handling and a whisper-quiet ride, which are also trademarks of the Corsair’s siblings, the mid-sized Navigator, and the full-sized Aviator. Corsair remains true to its Quiet Flight DNA.

DeanMcManis wrote on November 22, 2019 - 4:06pm Permalink
I think that the Lincoln Corsair is a good looking crossover, and that new intelligent headlight idea is cool. Lincoln just has a tough job of getting themselves noticed in today's sea of crossovers. Lately, the news has been buzzing about the upcoming 2021 RAV4 Prime, which is a plug-in hybrid crossover due out next year, but practically nobody knows that Lincoln will also be releasing the new Corsair with a plug-in hybrid crossover model as well. The hard part for Lincoln is that the RAV4 Prime will offer much farther EV range, will be much quicker, and will likely be much cheaper as well. Lincoln would be smarter if they just designed some pretty bodywork and a plush interior for the Ford Mach-E BEV and called it the Lincoln Lightning.

Tesla-Funded Research Reveals One of The Biggest Mysteries of EV Battery
Tesla Tesla Buyer Nets a Whopping $12,000 Discount After Asking for Reduction
END_OF_DOCUMENT_TOKEN_TO_BE_REPLACED