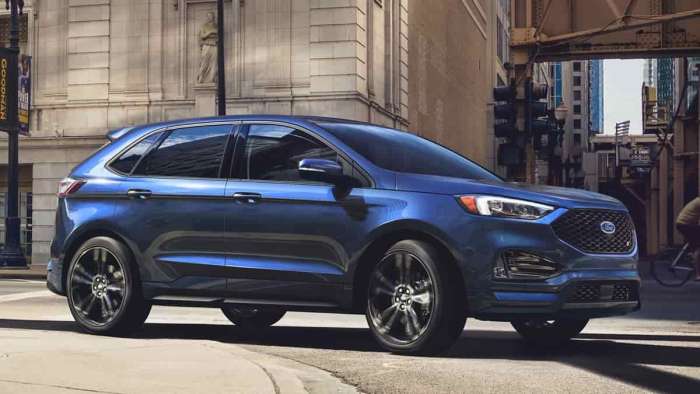 The Insurance Institue for Highway Safety has named the Ford Edge and its corporate twin the Lincoln Nautilus the winner of a Top Safety Pick award. It is the first time the SUV has received this honor.
Advertisement

Ford’s Edge crossover SUV has been an award-winner for a long time. It was named the “Urban Truck of the Year” as far back as 2007. Subsequently, the SUV, which went on sale in 2006, has received other awards.

Angela Cascaden, Ford Edge Marketing Manager, said: “We are pleased the insurance industry places such a high degree of trust in our 2019 Ford Edge.” It is the first time the Edge has received the distinction.

For 2019, the midsized crossover earned Good ratings in all six tests. Before this year, the Edge had only earned an Acceptable rating on the driver-side small overlap test. The small overlap test, instituted about a decade ago, simulates two crash conditions. The first is a head-on crash with another vehicle. The second is a crash into a stationary object – tree or utility pole. Both the Edge and its corporate twin the Lincoln Nautilus benefited from an improved bumper structure in 2019.

The area in which the Edge rocketed ahead was in headlights. It made all of the difference. Before March, the Edge and Lincoln Nautilus missed the Top Safety Pick honor due to their subpar headlights. After March, Ford upgraded the headlights on the pair of SUVs to adaptive LED projector lights. The change in headlights was enough to change the Poor rating that earlier versions of both vehicles had received to Acceptable. That change earned the Edge its Top Safety Pick rating. Base Ford Edge models still use the same LED projector headlights that had earned the lower rating.

IIHS crash testing is among the most rigorous in the car industry. Indeed, the group’s testing reflects real-world situations far more closely than tests conducted by the National Highway Traffic Safety Administration (NHTSA). The 2019 Ford Edge received a five-star safety rating overall from NHTSA. The only test where the Edge received a lower score was in the rollover crash test where the 2019 Edge received a rating of four stars.