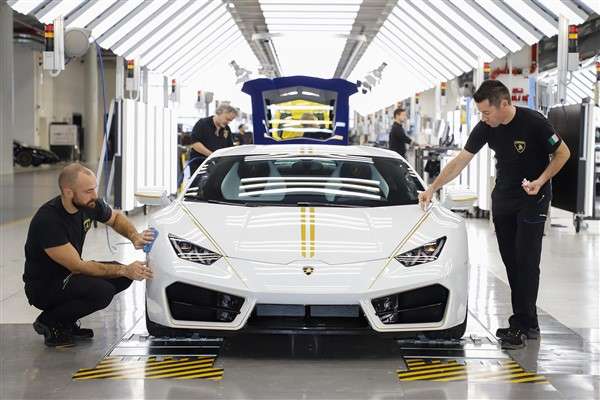 Lamborghini presented the Vatican with a special version of the Huracan RWD for auction to help fund three major programs that can use a bit of help.
Advertisement

There are donations, and there are donations! This donation, though, will likely have returns beyond anything one can imagine. Here’s the story: How much do you think a one-of-a-kind version of a Lamborghini Huracan RWD would bring at auction?

As things go, it might bring $300,000 to $500,000, perhaps as much as $850,000, on the regular auction circuit. How much do you think it might realize if it were to be used by the Vatican to fund programs like the reconstruction of an ancient Iraqi church or to assist a community dedicated to helping victims of abuse or programs that help children in Africa?

One hopes it will realize much more than $850,000 as this Lambo is carrying the hopes of many on its sleek body. The Lamborghini was presented to His Holiness Pope Francis Friday in Vatican City. It is scheduled to be auctioned by RM Sotheby’s on May 12, 2018. All of the proceeds will be used to support these programs:

Rebuilding on Iraq’s Nineveh Plain. Under the patronage of the Pontifical Foundation “Aiuto alla Chiesa che Soffre” (Aid to the Church in Need), part of the funding realized by auction is to ensure the return of the Christian community to Iraq’s Nineveh Plain by rebuilding homes, public buildings and places of worship.

Helping two Italian associations that carry out activities, primarily in Africa. The first is GICAM, headed by Dr. Marco Lanzetta and the second is “Amici per il Centrafrica” – Friends for Central Africa. Both programs have been in Africa for many years helping women and children in need.

Contributors to the development of the Huracan

The particular Lambo Huracan RWD donated to the Pope was the result of an idea pushed by the ad agency Riptide, Milan. “Ad Personam,” the automaker’s customization department made sure the idea became a reality. The special edition pays tribute to the Vatican’s flag.

Pope Francis attended the presentation of the vehicle along with Stefano Domenicali, chairman, and chief executive. Members of the company’s management board and two of the techs who built the specialty performance car joined His Holiness and Domenicali.