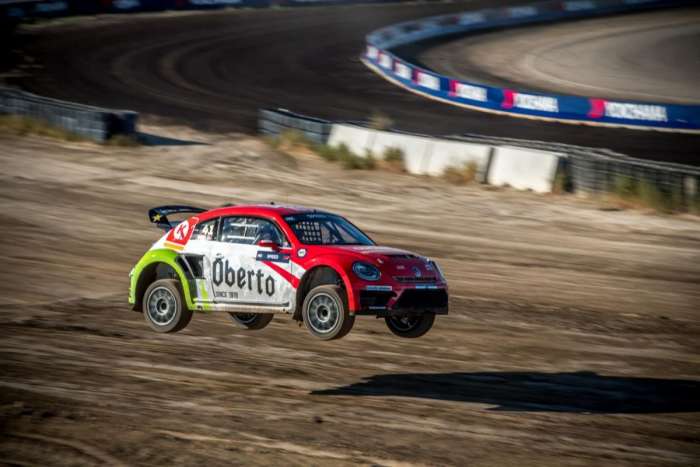 In what could be a tuneup for the final American Rallycross festivities this weekend, the drivers of the VW Andretti Rallycross team put on a hard-fought display of driving that saw one of them -- Scott Speed -- knocked out of the racing in the Final and the other -- Tanner Foust -- claw his way back to a well-earned third place in last weekend's Nitro Rallycross.
Advertisement

For the Volkswagen Andretti Rallycross team, it was a wild weekend that ended up with Tanner Foust, driver of the No. 34 Rockstar Energy Drink Rallycross Beetle, taking a podium after a crazy finish in the first Nitro Rallycross Final. The weekend came on the eve of the team’s participation in the final American Rallycross (ARX) racing of the season at Austin, Texas’ Circuit of the Americas. Speed, Foust Have Successful ARX Outing; Look To Final Subaru hopes to break VW’s hold on the championship and is bringing in a European rally star to help. Subaru Imports Ringer To Improve ARX Odds

The race started out pretty typically but quickly degenerated into a free-for-all as the leaders cracked up on Lap 1, pushing Scott Speed, the other VW Andretti team driver, out of the race. The dustup opened the door for the hard-charging Foust to make it to the podium.

Foust faced challenges all weekend as his crew kept busy repairing damage caused by extreme track conditions and close racing. He won his Challenger Heat, despite having a broken car. Mechanics from both sides of the VW Andretti Rallycross garage worked together to repair the multi-time rallycross champion’s Beetle so it could run in the Semifinal.

In the final, Foust started in the back half of the field. After all the jousting among the leaders in Lap 1, he emerged in third-place. Though wounded in the early skirmishing, the No. 34 Rockstar Rallycross Beetle managed to chase down the leaders nearly, however, it was unable to make up enough tack position before the checkered flag dropped.

The Weekend Was “Crazy For Everyone:” Foust

In an interview after the race, Foust called the weekend “crazy for everyone at Volkswagen Andretti Rallycross.” Acknowledging that he was glad “we got a bit of a reward for the effort,” Foust said he was “proud of how hard everyone’s worked.”

A disappointed Scott Speed, who enjoyed a somewhat less hectic weekend until the bloodbath on the first lap ruined his chances for a top finish, called the race a “new experience for me.” Speed, the pilot of the No. 41 Oberto Circle K Rallycross Beetle had earned an automatic spot in the Semifinal because of his quick times in the Heat races. Indeed, Foust’s teammate looked set to challenge for victory, until the first-lap carnage occurred.

Speed, who said it was quite an experience learning to “take a giant jump and racing on a course with all sorts of crazy racing obstacles to contend with … It’s a shame that the Final had to turn out the way it did, but I’ll take the learnings from this weekend as we finish out our regular season of races next weekend.”

Indeed, the Volkswagen Andretti Rallycross team returns to action on Saturday at the inaugural Americas Rallycross Championship at the Circuit of the Americas in Austin, Texas.