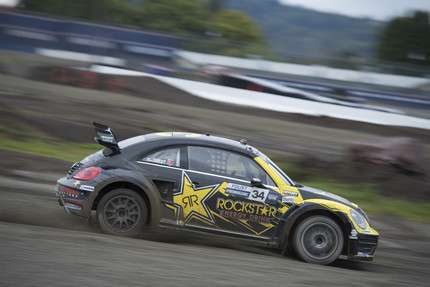 With drivers for the Volkswagen Andretti Rallycross team battling for the points leads, the series moves on to Los Angeles following the team's victory in Seattle. The marque is already on track to win the Manufacturer's Championship.
Advertisement

Still battling for the points lead in the Red Bull Global Rallycross series, Tanner Foust, and teammate Scott Speed finished first and fourth, respectively, keeping the points race tight between them as they head into the final races of the season in Los Angeles. Foust and speed drive for the Volkswagen Andretti Rallycross team.

What made the finish more exciting for Speed was the way he bounced back from on-track difficulties in his semi to drive to a hard-fought fourth-place overall finish. The fourth place finish helped speed stay on the heels of Foust, who was an easy victor in this past weekend’s racing.

Foust and Speed have a healthy points lead over their championship rivals. Foust’s win, which gave Volkswagen Andretti Rallycross its seventh victory of the season, also will help to ensure that when the dust settles the Manufacturer’s Championship will go to VW.

Despite the fact that they only campaigned two cars this season, the marque ended up in the winner’s circle in three-quarters of the races this season, a record-breaking run for the team.

Foust’s win extended his unbroken string of Heat and Semifinal victories in Seattle to 25 last weekend. His success in the early rounds of the competition set him up for a pole position in the final. The driver of the Number 34 Rockstar Energy Drink Beetle GRC broke cleanly in the final, opening a gap in the early laps and never looking back as he took the checkered flag more than three seconds ahead of his closest competitor.

An excited Foust said after the race that they had some trouble sorting things out in the qualifiers, however, once things were straightened “we really came back strong in the races this weekend,” he said. “It’s awesome to come to a place with such great fans and put on a heck of a show on one of the gnarliest tracks we’ve seen all season.”

Foust had lots of praise for the Volkswagen Andretti Rallycross team, saying he was “super proud of the whole … team to get another win with all the tough competition we’re facing.”

A Much Bumpier Ride

Speed, on the other hand, had a bumpier ride than his teammate. After he was spun on the opening lap of his semi, his No. 41 Oberto Circle K Beetle GRC was forced to start from the back of the field. Battling through a crowded field, contact that broke his Beetle’s hood forced him to retire. He qualified for the final through the Last Chance Qualifier, earning a starting spot on the final row of the grid. Speed climbed through the field in his Beetle GRC, reaching and finishing fourth on the final lap.

“After an up and down weekend, we ended on a positive note,” Speed said, “working our way through the field on the final. Just one spot shy of the podium, but we’ll take what we can get. Our crew worked really hard to get the car back together for the [qualifier], so I’m grateful for all the hard work everyone put in.”

Foust and Speed, though teammates, will take their points race down to the wire on Oct. 9 when the Volkswagen Andretti Rallycross team will take to the track for the final rounds of the 2016 season in LA. The doubleheader event will air live on NBC. Check your local lists for the outlet and local race time.