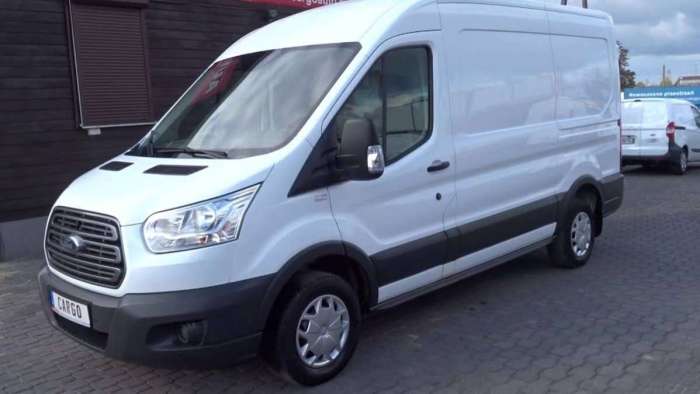 In its second recall of the month, Ford has recalled a number of 2019 Transit vans to look at problems with a rear axle flange that may be warped.
Advertisement

Though you may not think of them very much, there are 20 nuts and studs on your vehicle that are keys to your safety. Each wheel on your Ford vehicle has five wheel studs and nuts that keep your tires firmly attached.

There they sit, day-after-day, week-after-week, and month-after-month uncomplaining as they go round-and-round, doing their essential safety work. Indeed, you probably never give them a second thought, other than vaguely looking at them as you walk to your vehicle before you get inside and drive away.

Without them, though, your vehicle is in for a world of trouble because your wheels would fall off without the wheel lug nuts tightened correctly. What happens if the lugs tightened (torqued) down correctly? Here's a personal story that happened some years ago on a major road outside a major city. Ford last week recalled a number of Explorer SUVs to look at a roof rail issue.

I had been having trouble with rusting studs on a front-drive minivan that I once drove. I don't know what type of metal the manufacturer used to fabricate the studs, but I think it wasn't the most expensive of steels on the market because they were severely rusted when I removed one of the wheels to change a flat.

Granted, I hadn't changed the wheel in some time, so it gave the rust a chance to get a great head-start, but it shouldn't have rusted in the first place. Honestly, I barely missed snapping one of the lugs off as I had to stand on the lug wrench (this was before I found a four-way lug wrench at a store) even to break the stalled lug nut free of the iron grip of the rust collar that had formed.

Getting the tire from its under-van storage carrier proved another major anti-rust expedition as the spare was rusted securely in place. Once it was broken free of the imprisoning rust, I could access the spare and carry it to the position of the flat, the left-front-drive axle.

As I noted, it did take some work to get the flat tire off so I could mount the spare – I had a full-sized spare – on the axle. Indeed, I had to take a wire brush and clean the five lug studs free of rust. It did take some work to do, and I thought I was free and clear as I put the spare on and took it around to the air pump at the dealership where I worked at the time and pumped up the spare to the proper pressure.

I left work that day a bit early, as it was my early evening off the sales floor. It was still prime drive time in the exurb the dealership was located. As I drove home, though, I noticed the steering felt funky. The steering wheel was doing strange things like juddering and shaking. The front-drive van also handled very poorly.

As I drove along the major road opposite our front door, I looked to my left, and I saw that the spare tire had worked itself free of the studs and was bouncing along at about 30 mph – traffic was heavy at the hour. I was in shock as I watched the tire bounce once, twice, and a third time, hop the center barrier and head into the oncoming lanes. I will never know how it avoided hitting another vehicle as the tire then bounced a fifth time at just the right moment as the passing lane was free of traffic. The free-running tire seemed to pick up speed as it jounced across the oncoming traffic lanes. It hit the middle lane in a space and then jounced again into the underbrush surrounding a river over which I was passing.

I never did see the spare again, and I am surprised that I could retain control of the vehicle as the left front axle, stripped of its tire, planted itself firmly into the tarmac. For whatever reason, I was able to wrestle the van into the breakdown lane, where I waited for road service to come and tow the vehicle to the dealership, where they fitted a new spare.

Van Leaves Its Mark On The Roadway

To indicate the force with which our van had planted itself in the road surface, I was able to see the long reverse-S for many years. It was inscribed permanently into the road surface as I managed to wrestle the van to a safe stop. I still thank whatever powers were watching me that rush hour as the tire missed any traffic in the lanes beside me as well as in the oncoming lanes. I was also able to wrestle a front-drive van out of traffic and into a safe spot.

I know I have written a great deal about a vehicle incident that barely took 30 seconds from start to finish, but the point of describing it in detail is that the lug studs were in the vice-like grip of rust. I thought I had also cleaned the rust up, but I hadn't, and, instead, I saw the spare passing me in the left lane.

So, why did I write about this particular long-ago incident? It is simple, the National Highway Traffic Safety Administration (NHTSA) has ordered the Ford Motor Co. to recall 2,503 2019 Transit T150, T250, and T350 vehicles, equipped with aluminum alloy wheels. The problem is a warped axle flange may cause the wheel studs to fracture. In turn, it could increase the risk of a crash. My colleague Jimmy Dinsmore recalled information information on a number of recall issues.

The recall will begin next month when Ford sends out notification letters to the owners of the vehicles suspected of having lousy axle flanges. In the letter, owners will be told to bring their vehicles to their local dealers, where technicians will inspect and, if necessary, replace the rear axle shaft assembly, axle shaft mounting bolts, and rear-wheel lug nuts free of charge.

Not too long ago, Ford recalled 600,000 vehicles to repair a front axle camera problem.

Robin c Rupe wrote on July 7, 2021 - 6:01pm Permalink
I have a recall notice... and when you call the customer service number it is automated and it does NOT recognize 21S21. The Rich Ford dealership in Albuquerque knew nothing about it.