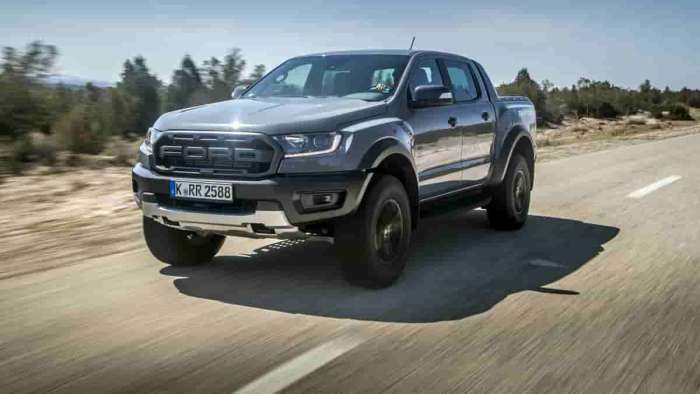 Hyundai seems to be accepting the challenge from Ford as the South Korean automaker plans a competitor for the Ranger Raptor. The model, currently sold only in Europe, could end up in the U.S. as a next-gen pickup.
Advertisement

Although Europeans may look at the variety of models in the Ford F150 and Ford Ranger lineup enviously, there is a model that Europeans have access to that U.S. buyers want the Ford Ranger Raptor.

The Ranger Raptor is a performance-oriented mid-sized pickup. Though more expensive, European buyers like the truck as it is selling very well. Indeed, the Ranger Raptor is selling well enough so that it is encouraging other truck manufacturers to jump into the deep end of the performance pool. In the U.S., Raptors are thought to be expensive. However, you son'r have to spend all-outdoors as a correspondent's story shows.

Take Hyundai, for example. The South Korean vehicle manufacturer, which produces the Kia and Hyundai lineups, is not only thinking of fielding a pickup to compete against the Ford Courier but is also seriously considering a pickup to as competition for the Ford Ranger Raptor. Although Hyundai doesn’t have a truck in its lineup now, one is said to be on the way.

Albert Biermann, head of the Hyundai N project, was asked about the possibility of a pickup by the Australian publication, Carsales.com. Asked if he was planning to create an N version of the upcoming truck to compete with the Ranger Raptor, Biermann replied that there are no limits to what may be coming from Hyundai – you have to be ready for anything. Biermann talked with the Australian car trade journal Carsales.com.

As to its market, the Hyundai N’s target purchaser is the same buyer as the Ranger Raptor. The N will likely feature a long-travel, race-truck-style suspension. With aggressive looks and more power than the Ranger Raptor, the Hyundai N will probably feature the engine found in the automaker’s i30 N. That powerplant is a 2.0-liter turbocharged four that cranks out about 301 horsepower. In contrast, the Ranger Raptor turns out roughly 290 horsepower from its EcoBlue diesel four

In terms of performance, the Hyundai N pickup would probably go from 0 to 100 km (roughly 0 to 60 mph) in under seven seconds. This performance is better than the Ranger Raptor.

As to the Raptor, itself, reviewers have called it a very capable mid-sized pickup. It is the only Raptor available to the European market. It features a 10-speed automatic transmission.

About Marc Stern: I have been an automotive writer since 1971 when an otherwise normal news editor said "You're our new car editor," and dumped about 27 pounds of auto stuff on my desk. I was in heaven as I have been a gearhead from my early days. As a teen, I spent the usual number of misspent hours hanging out at gas stations Shell and Texaco (a big thing in my youth) as well as working on cars. From there on it was a straight line to my first column for the paper, "You Auto Know," an enterprise that I handled faithfully for 32 years. Not too many people know that while I was writing YAN, I also wrote and managed computer documentation for a good part of my living. My best writing, though, was always in cars. My work has appeared in venues including Popular Mechanics, Mechanix Illustrated, AutoWeek, SuperStock, Trailer Life, Old Cars Weekly, Special Interest Autos, and others. You can follow me on Twitter or Facebook

Source: The primary sources for this article was The Ford Authority. The Ford Authority comprises several publications that present independent news and information about the Ford Motor Company, as well as current and future models.