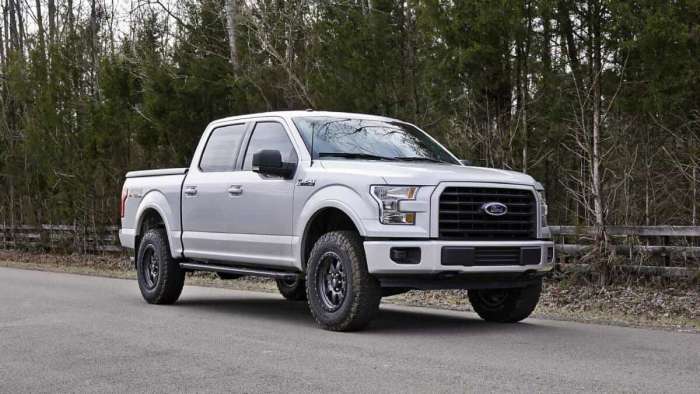 For any Ford F150 driver who is serious about towing then this one's a no-brainer. Instead of hoping you will have a level ride and great handling, you can virtually guarantee it with an Air Life Air Suspension system.
Advertisement

A couple of months ago, Torque News discussed the need for proper load and balance in your Ford F150 when you are towing. We’re sure that some of you thought the story was either simplistic or that you have trailered for so many years you know how to things almost automatically.

Make no mistake about it, properly loading your Ford F150 is very important from many standpoints. For example, if you throw lots of stuff into your pickup bed, without proper loading plans, not only will the items tend to fly around on you as you drive along, but it will also contribute to poor handling, roadability, drivability, as well as stowage. Besides, if you load things correctly and securely, you not only are ensuring your safety, but also that of your passengers, and the vehicle, itself.

Let’s face it, no matter how good you are or how long you have been trailering; there is always something new to be learned. Take a little thing like fuel, for instance. Should you take it with you or should you wait until you get to your destination? And, if you do take it with you what type of stowage should you use, aside from safe gas-cans that is. Fuel safety is a given as you travel in a Ford F150. Whether you are hauling tents and a gas grille or off-roading motorcycles, each needs its type of fuel, stored safely. Our recommendation for stowage is simple, and it helps to handle. If you are carrying fuel, put half of your fuel on one side of the cargo bed, near the tailgate. Meanwhile, put the rest of the fuel you may be carrying on the opposite side, correctly secured, of course. As was pointed out in a Ford F150 loading story proper loading is key to driving.

This way, the fuel is safely stored, and its location helps provide balance for the cargo bed. That is the key to your initial loading; balance.

Let’s say, though, that you are going to be carrying lots of cargo and people in your Ford F150 SuperCrew. Since it provides interior seating for six, plus stowage underneath the seat, as well as in internal bins, you can carry a goodly amount of cargo with you in the cabin. However, let’s say, further, that you are right at the edge of the payload numbers for the SuperCrew between the interior and the cargo bed. It’s also a situation that occurs frequently. What is the solution?

In the following video, you will see what it takes to install a LoadLifter suspension system:

How about an air suspension system that will help both balance your load; and improve handling and towing? It’s not a bad idea. One solution comes from Air Lift, which already makes a similar system for the mid-sized Ford Ranger series.

The LoadLifter system features a new design and better ride comfort. The air suspension systems can support up to 5,000 pounds. The systems eliminate issues with towing heavy loads or trailers.

The LoadLifter systems have a 5 to 100 psi adjustability range. The suspension systems work with wired, wireless, and automatic on-board air compressor systems. This type of suspension is one way – a relatively inexpensive one, at that – to make sure your Ford F150 handles well when it is fully loaded. If you tow a great deal, you will find the LoadLifter system a real plus.