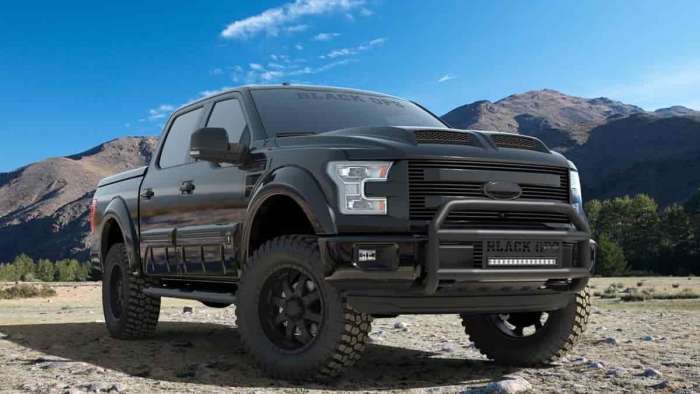 Do you have a yen for a truck that screams military as it sits in your driveway? If so, you can head over to your Ford dealer and order a Tuscany-built Ford F150 Black Ops Edition. Be aware, it is a tad pricey.
Advertisement

Whether it is a video gaming or military jargon or a Jack Ryan spy thriller, you probably have heard the term “black ops.” And, however you think about them, you do have to admit that there is something exciting about “black ops.” Imagine, if you are in the market for a truck, that you can have a “black ops” version on a Ford F150. That’s right; you can have your very own F150 “Black Ops” Edition, a truck that you can order through your local Ford dealer, as well.

There’s an Indiana-based aftermarket manufacturer, Tuscany Motor Co., that specializes in creating a Black Ops series of pickups. Because of its special relationship with Ford Motor Co., Tuscany takes Ford F150s directly from the factory and turns them into the special Black Ops pickups. The trucks look like they are ready to take on military action.

Done in Lead Foot Gray, Black Ops Ford F150s feature special fender flares and vents, as well as special rocker molding done with Black Ops badging. A pair of black powder-coated tips complete the upgraded exhaust system. The upgraded system gives the Black Ops F150 an especially throaty roar, much more in keeping with the theme of the pickup. The package includes a tonneau cover in Lead Foot Gray, the same finish as nearly everything else.

On the inside, the upholstery is leather that features embossing with Black Ops badging and American flags. The dash trim is faux carbon fiber and there is a special Black Ops instrument cluster.

The rest of the pickup is standard F150 Lariat. The Lariat option features powered running boards (that swing up and out of the way when not in use), power tailgate, as well as just about every other electronic option offered by Ford. The electronics include cameras front and rear, a monster stereo system, dual-panel moonroof, and active safety systems.

One interesting departure that you might find interesting is that instead of a bedliner – spray-in or factory – the bed is carpeted with the carpeting attached by Velcro®.

And, even though the Black Ops paint and other items are cool, you do have to ask yourself if having a military-themed pickup worth nearly $90,000 is worth it? Torque News will leave you to answer that one yourselves.